Starc said he could not remember having sledged Sarfraz during the last Test series between Australia and Pakistan.

Australian left-arm quick Mitchell Starc does not believe that verbal aggression will be part of his strategy in the two-Test series versus Pakistan in the UAE next month, instead asserting that getting back to full stride is his focus.

Starc s comment come after he was prompted to respond to Pakistan captain Sarfraz Ahmed s recent comment to cricket.com.au in which he said: If you play against Australia you have to play a good series. Lots of sledging as well. Starc might do something like that, so I think this will be a good series. I don’t like sledging though.”

Asked by the same website on Wednesday ahead of Australia s departure to Dubai, Starc said he could not remember having sledged Sarfraz.

“It’s going to be a good series. I’m sure there’s going to be a bit of feeling in it there’s obviously great competition between both sides. It was a quality series last time they were out here and we haven’t been to the UAE for a few years. I don’t think I’ll be one to say too much out there it’s going to be quite warm and quite flat, so hopefully I’ll let the ball do the talking.”

Starc will return to international cricket in the UAE after being sidelined since March a tibial bone fracture in his right leg, sustained during the controversial tour of South Africa. He missed the IPL and Australia s limited-overs tours of England and Zimbabwe. 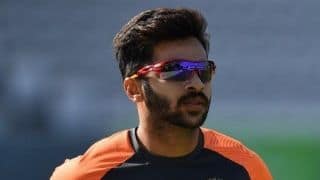