Australia’s tail wagged and took the tourists to stumps on Day One of the fourth Test against India with two wickets still in hand — a scenario which seemed implausible at the end of the second session. Australia ended the day at 231 for eight with a frustratingly defiant Peter Siddle (47 not out) and James Pattinson (11 not out) at the crease. 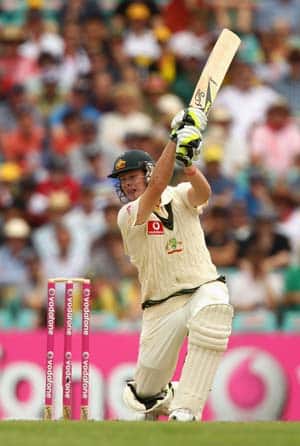 Australia’s tail wagged and took the tourists to stumps on Day One of the fourth Test against India with two wickets still in hand — a scenario which seemed implausible at the end of the second session. Australia ended the day at 231 for eight with a frustratingly defiant Peter Siddle (47 not out) and James Pattinson (11 not out) at the crease.

The Australian Nos 9 and 10 may not last long on Day Two, but that wouldn’t, or shouldn’t, take anything away from their efforts today. In the penultimate over of the day, Siddle drove Bhuvneshwar Kumar through the covers with the class of a No 3 batsman. The ensuing delivery was flicked off the pads to the fine leg fence for four more. The two boundaries did not add much to his overall strike-rate of under 40, but Siddle’s 46 off 122 balls could go on to make India pay depending on how this Test match pans out.

Steven Smith was the other cog in the wheel of India’s cruise to bowling out Australia on the first day of the Test. The sprightly all-rounder took the attack to the Indians and hit three boundaries and two sixes in his 46 off 145 balls. He shared a 53-run eighth-wicket partnership to defy India after the hosts had reduced Australia to 136 for seven.

Ravichandran Ashwin eventually dismissed Smith in the post-tea session for 46, and just as India began to plot the kill, it was the turn of Siddle and Pattinson to further resist the onslaught. The duo fought like valiant knights outnumbered in a battle, facing exactly a hundred balls for their 42. Siddle took over from Smith as the primary batsman at the crease after the latter’s dismissal and calmly guided Australia to stumps without further damage. Siddle also reached his highest Test score in the process and could go on to increase his tally on Day Two with the determination he’s showing.

Earlier, the two teams shared the spoils for the first session of the day with Australia taking lunch at 94 for two after winning the toss and electing to bat first. The tourists had made as many as four changes to the side that lost the third Test at Mohali. Shane Watson was made captain in place of the injured Michael Clarke, as his fellow suspendees at Mohali — Mitchell Johnson and James Pattinson — were also drafted into the playing XI for Xavier Doherty and the injured Mitchell Starc. Glenn Maxwell was also brought back in the playing XI as Nathan Lyon’s spin partner, with Moises Henriques missing out.

India, meanwhile, made just the one change with Ajinkya Rahane getting a Test debut in place of Shikhar Dhawan, who hurt his hand while fielding in Mohali.

Even though the Kotla pitch appeared conducive to spin bowling with its ever-increasing cracks, pacer Ishant Sharma got both wickets in the session for the hosts.

The post-lunch session was a nightmare for the tourists as they lost five wickets and scored just 59 runs. All five wickets to fall in the second session were shared between spinners Ashwin and Ravindra Jadeja, which was in sharp contrast to the morning session.