The TV umpire, who has the advantage of watching the replay, spotted the missed chance and overturned the decision before the Indian opener crossed the ropes. In the second over of India’s chase of 148, opener Smriti Mandhana got a reprieve when TV umpire overturned the on-field umpire’s decision on Thursday during the 1st T20I against England Women at Manuka Oval, Canberra on Friday.

Mandhana, looking to cut the ball could only manage an edge which went to wicketkeeper Amy Ellen Jones, who had caught the ball and rolled over. But while getting up she was not in complete control of it and the ball popped out of her gloves. This was not noticed by the on-field umpires who gave the 23-year-old out.

The TV umpire, who has the advantage of watching the replay, spotted the missed chance and overturned the decision before the Indian opener crossed the ropes.

Unfortunately, Mandhana could not make it count as she was dismissed for 15 off 10 balls.

Smriti Mandhana was given out but the decision was later overturned.

India are 22/0 after two overs and need 126 more to win.#ENGvINDpic.twitter.com/tusTTxfvtF

However, Harmanpreet Kaur’s 42 off 34 balls ensured the visiting side gunned down the target with three balls to spare. India won the match by five wickets to take a 1-0 lead in the series.

Earlier in the match, Kaur won the toss and invited the hosts to bat first. 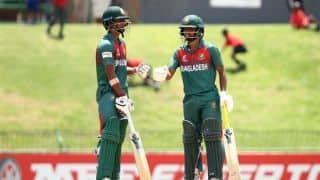 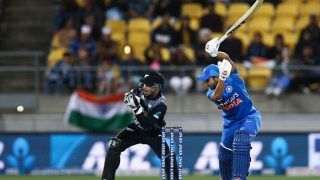