Pakistan cricketer Sohail Tanvir’s handy all-round performance and a crucial innings from Henry Davids were the high spots in propelling St. Lucia Zouks to their first victory of the Caribbean Premier League (CPL) 2014 over Antigua Hawksbills by five wickets under the Duckworth-Lewis Method on Sunday.

Tanvir followed up his typically miserly left-arm swing bowling with 20 not out to make him a shoo-in for the Man-of-the-Match award and Davids hit the top score of 43, as the Zouks broke their dry spell and successfully chased a victory target of 106 in their rain-affected match at the Beausejour Cricket Ground, reports CMC.

Tanvir fittingly formalised the result with 15 balls remaining, when he launched Hawksbills captain and West Indies batsman Marlon Samuels, bowling his off-spin darts, for successive sixes over deep mid-wicket. The result meant that the hosts collect two points, following six successive losses like their opponents, who are now the only winless side in the six-franchise competition, which now moves to St. Kitts for its ultimate conclusion over the next two weeks. Tanvir grabbed 3 for 15 from his allotted four overs, as the Hawksbills posted an unthreatening 103 for six from their rain-reduced 16 overs.

After the start was delayed for close to half-hour, there was a second interruption during the ninth over of the Hawksbills innings that forced the reduction in the maximum number of overs for each side. Danza Hyatt led the way for the Antigua-based side with 26, Samuels was not out on 21 and with all-rounder Carlos Brathwaite, not out on 20, added 32 from the last three overs to get the Hawksbills over the 100-run-mark. The Zouks face Jamaica Tallawahs in their penultimate match Saturday at Warner Park, where the Hawksbills meet Guyana Amazon Warriors two days earlier for their penultimate match. 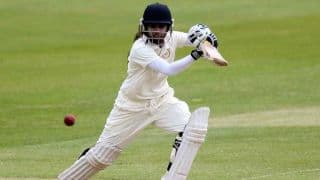