Aiden Blizzard cracked a 39-ball 54 as Mumbai Indians posted a challenging 160 for five against Somerset in the second semifinal of the Champions League Twenty20 on Saturday. 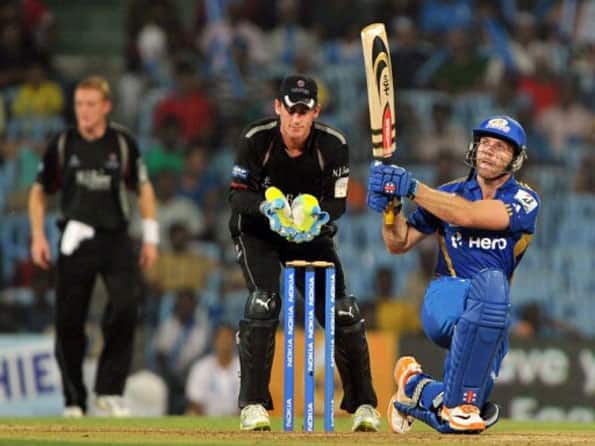 Aiden Blizzard cracked a 39-ball 54 as Mumbai Indians posted a challenging 160 for five against Somerset in the second semifinal of the Champions League Twenty20 on Saturday.

Blizzard, however, didn’t get much support from the middle-order and if it had not been for the late charge by Suryakumar Yadav (23 not out) and Rajagopal Sathish (25 not out), Mumbai would have ended with a much low score.

After a watchful start, Mumbai reached 76 for two in the first 10 overs. Blizzard then changed gears and brought up his fifty in style, blasting Murali Kartik for a six over mid-wicket in the 11th over.

However, Roelef van der Merwe trapped Franklin plumb in front of the wicket in the next over, while Murali cleaned up the 27-year-old Blizzard in the 13th over as all of a sudden Mumbai were reduced to 92 for four.

Big-hitting West Indian all-rounder Kieron Pollard then joined hands with Yadav, who was drafted into the side in place of Andrew Symonds, and brought up Mumbai’s hundred with a six over deep midwicket off van der Merwe.

Pollard repeated his feat against Peter Trego, dispatching him over deep midwicket in the 16th over before Alfonso Thomas destroyed his timbers to once again push Mumbai on the backfoot.

Yadav and Sathish, however, produced the much-needed late onslaught and amassed 43 runs off just 22 balls to take Mumbai across the 150-mark and post a challenging total at the slow MA Chidambaram Stadium track.

Yuvraj Singh in no hurry for India comeback