Auckland Aces were knockout of the Champions League Twenty20 tournament after they suffered a four-wicket defeat against Somerset in a nail-biting qualifying match here on Tuesday. Auckland Aces were knockout of the Champions League Twenty20 tournament after they suffered a four-wicket defeat against Somerset in a nail-biting qualifying match here on Tuesday.

Electing to bat, Auckland could never recover from their disastrous start where they lost three wickets for 14 runs in 3.1 overs and were restricted by Somerset to 125 for seven in their stipulated 20 overs.

Lou Vincent provided some resistance with an unbeaten run-a-ball 47, laced with three fours and a six, but with wickets tumbling on the other hand, he could do very little.

Somerset batsmen then achieved the target in the last ball of the match to keep their hopes alive of qualifying for the main tournament. They will take on Kolkata Knight Riders in a virtual knock-out tomorrow.

RE van der Merwe and Peter Trego then took Somerset across the fifty mark but Ronnie Hira struck in the ninth over, removing the former to reduce them to 52 for two.

Michael Bates then struck twice in two balls, dismissing Trego and Nick Compton, as all of sudden Somerset slipped to 54 for four in 9.2 overs.

James Hildreth and Steve Snell then joined hands and stitched 61 runs off 48 balls to take Somerset on the threshold of victory.

Hildreth was run-out in the second last delivery of their innings when he tried to steal an extra run but it didn’t have any bearing on the results as next batsman Thomas scored the winning runs in the last ball of the match.

Earlier, Somerset bowlers Peter Trego (2/26) and Alfonso Thomas (2/21) picked up two wickets each, while Max Waller (1/18) and RE van der Merwe (1/25) took one each to restrict Auckland to a modest total.

Openers Martin Guptill (9) and Jimmy Adams (0) failed to give Auckland a good start as Trego trapped the latter in front of wicket in the second over itself.

First down Rob Quiney (4) also could not last long and was sent packing by Thomas in the third over after being adjudged lbw to a delivery that stayed a touch low.

Guptill, who was dropped by Waller in the second ball off Thomas, couldn’t make use of the opportunity and was dismissed by Trego when his lofted shot landed in the hands of Hildreth.

Skipper Gareth Hopkins and Vincent then joined hands and brought up the fifty in the ninth over.

Vincent scored his first four with a thickish edge past the keeper, before hitting Trego for a boundary and a six in the sixth over.

Hopkins then hit a couple of fours before a direct throw from Arul Suppiah ended his innings and reduced Auckland to 63 for four in 10.1 overs.

Colin Munro (6), Mills and Hira too failed to make any impact, while Andre Adams (13) had just a six to his name.

Man of the Match: Steve Snell 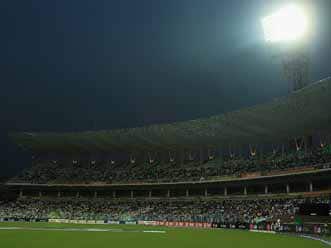