New Zealand Women have won the 17th match of Women’s T20 World Cup 2016 played against South Africa Women by seven wickets and 33 balls remaining. Sophie Devine and Leigh Kasperek shined for New Zealand in the bowling department while Suzie Bates did her bit with both bat and ball. New Zealand had invited South Africa to bat first. The decision proved right as they bowled out the opposition for a measly 99. Sophie Devine and Leigh Kasperek took three wickets each as South Africa struggled throughout their innings. Erin Bermingham and Suzie Bates chipped in with two and one wicket respectively. Dane van Niekerk and Marizanne Kapp got starts but they were not able to convert them into fifties. They scored 18 and 22 respectively. But besides them none of the South African batswomen could pose any threat to the opposition. LIVE BLOG: New Zealand Women v South Africa Women, ICC Women’s T20 World Cup 2016, NZW vs SAW, Match 17 at Bangalore

In reply, New Zealand got off to a flyer as they added 41 runs in the first six overs without losing a wicket. Rachel Priest and Suzie Bates were batting on 24 and 17 at that moment. Masabata Klaas then sent Bates back to the dugout for 29 runs. Bates struck five boundaries in her 25-ball 29-run knock. Priest was then trapped by Dane van Niekerk for a run-a-ball 28. Sara McGlashan was the next in line as she was trapped by Marizanne Kapp for only five runs. Sophie Devine, who came one-down and middle-oder batter Katey Martin took South Africa home. Devine scored an unbeaten 27 off just 17 balls. She hit three boundaries and a six in her innings.  Martin, on the other hand made eight runs from 10 balls and carried her bat through the innings. 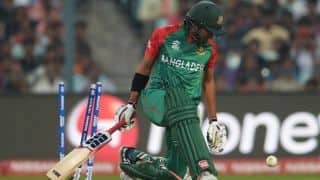