Sarkar was caught by wicketkeeper Sarfraz Ahmed to depart for an 11-ball 17.

Bangladesh lost their first wicket after scoring 22 runs when Soumya Sarkar was dismissed for a score of 17 off 11 balls during the 2nd One-Day International (ODI) against Pakistan at the Sher-e-Bangla Stadium in Mirpur on Sunday. Sarkar edged a Junaid Khan delivery to wicketkeeper Sarfraz Ahmed after hitting four boundaries during his short stay at the crease. Live Updates: Bangladesh vs Pakistan, 2nd ODI at Mirpur 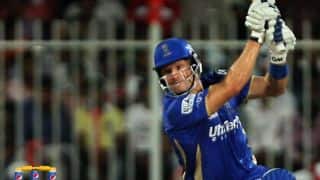