Soumya feels not thinking much about regaining his place back in the side is helping him bat with freedom and without pressure.

Soumya Sarkar was one of the two players drafted into Bangladesh s Asia Cup squad as replacement for the injured Tamim Iqbal. The allrounder, who has lately been restricted to making sporadical appearances for Bangladesh, feels not thinking much about regaining his place back in the side is helping him bat with freedom and without pressure.

Soumya, who also bowls gentle medium pace missed to cash in on the two chances he got during the Asia Cup but made an impact for Khulna Division in the National Cricket League where he scored 76 and 71 and picked up 5 for 61 against Rangpur Division, having scored an unbeaten 103 against Rajshahi Division. He carried that form in Zimbabwe and struck another century for Bangladesh XI as they beat the Zimbabweans by eight wickets in a warm-up game.

“It is not true that I was thinking if I can score runs, it will help me in getting back into the national team,” Soumya said at the conclusion of the match. “In that regard, there was nothing like (me) feeling relieved. For me, it was just another game and I was looking forward to making the best use of it. It could be that it [not thinking too much about the national team] helped me.”

BCB XI s bowlers ran through the Zimbabweans line-up bowling them out for 178 with Ebadat Hossain taking five for 19 runs, while Mohammad Saifuddin contributed with three for 32. Sarkar then led the chase with an unbeaten 102, including 13 boundaries and a six to finish the match in 39 overs.

Prior to the Asia Cup, Soumya last featured in ODIs in the away series against South Africa last year, where he played one match scoring 8 – making his tally 42 in his last five ODI appearances. He was dropped for the subsequent tri-series at home, and for the tour of West Indies in July-August.

“It is not that I am in good touch, so I was more determined to play for as long as possible at the wicket, and for me enjoying the occasion was more important than anything else,” Soumya said. “Earlier when I was not in the national team, I was always thinking that I have to return back to the national side by scoring runs, but I try to avoid thinking on those lines now.” 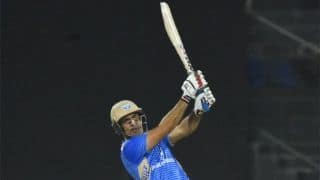 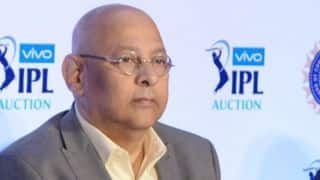