The prestigious Eden Gardens, Kolkata has played host to many glamorous events like the opening ceremony of Indian Premier League (IPL) 2015 and is now all set to get ready for another music concert prior to the mega event of ICC World T20 2016 involving risks of the pitch getting affected due to it. The concert, which was primarily scheduled to take place at the Park Circus Ground, Kolkata will see eminent classical singer Ghulam Ali perform live and due to safety issues, the Chief Minister of West Bengal Mamata Banerjee wants it to be transferred to Eden Gardens and is known to have received the permission from CAB (Cricket Association of Bengal) president and former India skipper Sourav Ganguly. READ: MS Dhoni urges fans to prepare for ICC World T20 2016

The concert is scheduled for Januray 12 and if a few members of CAB are not happy with the decision. According to a report published in Ebela, a Bengali daily, a number of officials fear that the set up for the event may cause harm to the pitch. India is all set to host the ICC World T20 2016 and the final match of the tournament will take place in the Kolkata stadium. Apart from that, the Indian domestic season is going on and Eden Gardens is one of the venues. Prior to a big event and matches, damages done to the pitch would be least wanted.

According to sources, Mamata Banerjee had been given a proposal to shift the venue of the concert to Netaji Indoor Stadium, which is big enough and also hosts many of the city s events but the CM seemed to be specifically interested about keeping in unchanged. Though the news has been released from Nabanna, it is yet to be announced officially. 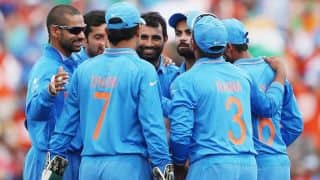