Sourav Ganguly, who is part of the three-member CAC responsible for selecting India's coach, on Friday, did not want to get into Anil Kumble's untenable remark as his reason for stepping down as India coach.

Former India skipper Sourav Ganguly, who is part of the three-member Cricket Advisory Committee (CAC) responsible for selecting India’s coach, on Friday, did not want to get into Anil Kumble’s untenable remark as his reason for stepping down as India coach, saying it’s not something he would like to get into. They are senior people, both of them have played enough cricket. We don t deal with all that. It’s between them, I don’t know what happened. I am not part of the dressing room. All I know is that he didn t want to continue and we will have to see what s the way forward,” Ganguly told reporters here.

Just before India’s tour of the West Indies, Kumble put in his papers citing his partnership with skipper Virat Kohli was untenable and that he believed it was best to move. Along with Ganguly, Sachin Tendulkar and VVS Laxman, the other two members of the CAC, tried their best to help solve the impasse between Kumble and Kohli during the ICC Champions Trophy but a thaw could not be ensured. ALSO READ: India likely to favour new coach who could get along with Virat Kohli, indicate BCCI officials

Asked if the dressing room culture had changed since the time Kumble left as captain, Ganguly said: It’s a tough question for me to answer. As I said it’s Anil’s decision. I don’t know the details. I don’t whether Virat asked him to leave. I cannot say anything more about it.

Kumble s one-year contract expired at the end of the ICC Champions Trophy where India lost in the final to Pakistan by 180 runs but he was given the option to travel with the team to the West Indies for the limited overs series.

Ganguly, who is also Cricket Association of Bengal’s president, said he is leaving for Mumbai on Monday to attend BCCI Special General Meeting.

I’m going to Mumbai on Monday.

The BCCI has extended the deadline for application of the next head coach till July 9.

The team is playing now. So there would be too many things. I don’t whether they have extended the time limit or not. Let’s see, said Ganguly. 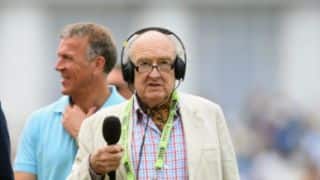