Sourav Ganguly is part of the BCCI advisory committee.

Former India captain Sourav Ganguly on Sunday defended Test skipper Virat Kohli’s call to play Rohit Sharma ahead of Cheteshwar Pujara in the ongoing one-off Test match against Bangladesh in Fatullah. “Virat wants to play five bowlers and in that case you have to sacrifice a batsman. Rohit played at number three in the last Test match in Sydney. Going by the form, it is fine,” Ganguly said on the sidelines of an event here. READ: Sachin Tendulkar, Sourav Ganguly, VVS Laxman suggest more India ‘A’ tours overseas

Going in the Test with five bowlers – pace trio of Umesh Yadav, Varun Aaron, Ishant Sharma and the spin duo of Ravichandran Ashwin and Harbhajan Singh – Kohli opted for Rohit instead of regular No. 3 Pujara. With rain robbing much of the action in the Test, Ganguly hoped offie Harbhajan Singh making a comeback after two years, got more opportunities. READ: Amul launches celebratory advertisement on India’s advisory panel

“He has taken two wickets in the match, but he hardly got much of an opportunity because of the rain. Hopefully he gets more opportunities and does well,” said Ganguly.

Ganguly also said he was looking forward to play in the new Twenty20 tournament featuring retired international players. Involving a series of exhibition matches, the event is a brainchild of cricket legends Shane Warne and Sachin Tendulkar. Ganguly who has been inducted to the Board of Control for Cricket in India’s (BCCI) newly-constituted cricket advisory panel, refused to comment on the speculations of team director Ravi Shastri becoming the coach. READ: Sunil Gavaskar says advisory panel consisting Sourav Ganguly, Sachin Tendulkar, VVS Laxman will find India coach soon

“I have no such report, when that happens we all will get to know,” he said.

Inaugurating the Shemrock Global Wisdom, a pre-school in the city, Ganguly confessed of having cried on his first day at school. “It reminds me of my preschool days. Though I don’t have much of memory but I remember I cried a lot on my first day at school,” said Ganguly. READ: Rahul Dravid to help BCCI ‘when the time comes’, says Anurag Thakur 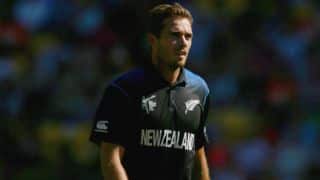