Sourav Ganguly: Captaincy is not an easy task

Sourav Ganguly: Captaincy is not an easy task

Ganguly spoke about how captaincy was never an easy task for him, among other things.

Former India cricketers Sourav Ganguly and VVS Laxman were present at the Hindustan Times Leadership Summit in New Delhi on Saturday. The duo spoke on various topics, from reliving their cricketing days to speaking on India’s current scenario and their chances in the ICC World Cup 2015.

Laxman, recalling his innings of 281 during the Kolkata Test in 2001 against Australia said, “Realistically, we had no chance to win the Eden Test. We never gave up. It was a miracle. The situation we were in, there was nothing in my mind.”

The former Indian cricketer also recalled the team’s famous win in Adelaide, during the Australia tour of 2003-04. Laxman said, “The Adelaide Test win was another miracle. Kolkata win inspired the team.”

#htsummit | Ganguly: Laxman, Dravid and I had quiet word in dressing room about spot fixing, we were young & never had knowledge of it

Ganguly also spoke about his captaincy days, saying it was not an easy task for him. “No matter how much I tried, always ended up reading the newspaper. Captaincy is not an easy task. You have a lot of answering to do. My biggest challenge as a captain was to tell either Harbhajan or Kumble that you are not playing.”

The former captain, also known as ‘Dada’ said that the cricketers that he played with had great attitude. “The best thing was the boys always thought for good of Indian cricket,” Ganguly said.

Ganguly was quizzed on the lack of quality fast bowlers being produced by India, which Ganguly chose to answer by pointing out to the fact that batsmen tend to be the role models among the aspiring cricketers today. He also maintained that though India have not been able to produce bowlers of the calibre of Wasim Akram and Waqar Younis, they have had the likes of Javagal Srinath. 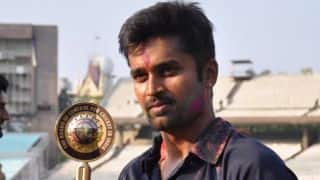