Sourav Ganguly did not rule out the idea of coaching the national cricket team, saying that he would want to appear for an interview in future.

Kolkata: Former India captain Sourav Ganguly did not rule out the idea of coaching the national cricket team, saying that he would want to appear for an interview in future. Ganguly is member of the Board of Control for Cricket in India (BCCI) Cricket Advisory Ccommittee (CAC) along with VVS Laxman and Sachin Tendulkar, assigned to pick the next India head coach. The trio are set to interview 21 candidates, who have applied to be the head coach of the national team here on Tuesday afternoon. “I have never had the chance of giving an interview [for the team India coaching job]. Hopefully someday will sit for it,” Ganguly said at an event here where he announced the name of his book – ‘A century is not enough’. Sourav Ganguly: Day-Night Test cricket innovative concept

The book is not an autobiography though and deals with the challenges a sportsman faces. Ganguly is working with veteran journalist Gautam Bhattacharya to pen it down and Juggernaut Books are set to publish it sometime in 2017. Speaking about selecting the India coach, the 43-year-old said, “It’s amazing how life is. Twenty years back I first played for the country. Now I have the opportunity to select a coach. I messed it up in 2005-06 (indirectly pointing to the appointment of Greg Chappell when he was captaining India) and I have been given the opportunity again.”

“Honestly two and a half years ago I was thinking of being here myself, and now I am selecting one. This time I have support from Sachin, Laxman and the BCCI secretary, so hopefully we will be selecting the right person,” the former southpaw added. After the interviews, the panel will recommend the names to BCCI President Anurag Thakur, who is currently in Dharamsala for the board’s first ever four-day annual conclave from Tuesday.

The board’s working committee, which will meet on the final day of the conclave is likely to put the rubber stamp on the new head coach, a post which has been lying vacant since Zimbabwean Duncan Fletcher’s contract ended in March 2015. 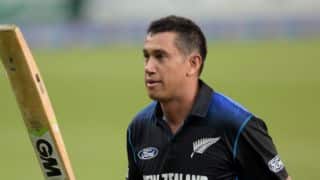