Sourav Ganguly and Harbhajan Singh are playing the Vijay Hazare Trophy for entirely different reasons but there would be no half measures when the mentor and protege lock horns for their respective states in the semi-final on Saturday. 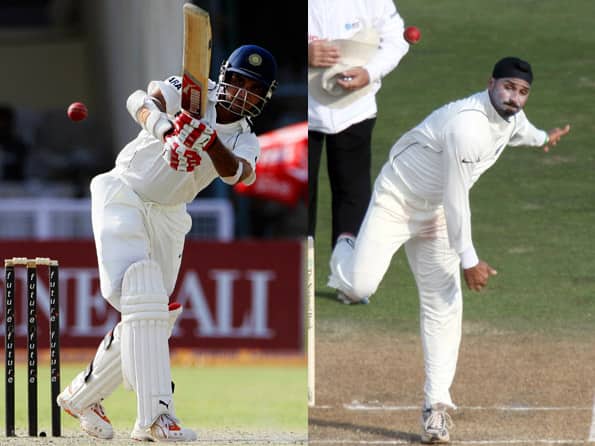 Sourav Ganguly and Harbhajan Singh are playing the Vijay Hazare Trophy for entirely different reasons but there would be no half measures when the mentor and protege lock horns for their respective states in the semi-final on Saturday.

While Harbhajan, who hasn’t exactly set the stage on fire but has been steady with both bat and ball, is itching to get back into the national fold, Sourav has used the tournament as a preparation for IPL where he would play for Pune Warriors.

On paper, Punjab are certainly the favourites to make it to the title round as they have adapted well having played all their matches, save one, at the Services ground in Palam.

Bengal, on the other hand, defeated Madhya Pradesh in the quarterfinals but they are still trying to get a hang of the conditions.

With skipper Ganguly not in best of touch having failed to cross 20 in any of his earlier innings and Manoj Tiwary on national duty, the onus will again be on Wriddhiman Saha, who has scored five consecutive half centuries in company of diminutive Anustup Majumdar.

Facing a hungry Harbhajan along with talented left-arm spinner Rajwinder Golu will be a tough proposition for some of the inexperienced Bengal middle-order batsmen like Arnab Nandy, Debabrata Das.

The absence of season’s highest wicket-taker Ashok Dinda will certainly affect Bengal’s chances as the speedster has been instrumental in guiding the team to semi-final with a five-wicket haul.

In Dinda’s absence, the onus will be on Mohammed Shami Ahmed to trouble the likes of Amitoze Singh, Chandan Madan, Bipul Sharma. Veteran Sanjib Sanyal is likely to get a game as his years of experience will be of great help. Laxmi Ratan Shukla with his gentle seam-up stuff can also prove to be a handful on a slow Palam track.

The spin department will be handled by left-arm spinner Iresh Saxena with Nandy who will be bowling his off-breaks. (PTI)

Rahul Dravid- The man who donned many hats