Sourav Ganguly stuck to his work commitments even on his birthday.

Kolkata: Soaked in work, former India captain Sourav Ganguly kept switching roles from football to cricket as he turned 43 with wishes pouring in from everywhere. The retired Indian lefthander began his day with about 500 fans gathering at the hall of his Behala residence where he cut cakes and also unveiled a ‘3D printed lifesize statue of himself’. QUIZ: How well do you know Sourav Ganguly?

Representatives of various local clubs and his fan clubs also brought cakes and Ganguly did not disappoint, even though that his Atletico de Kolkata had to push their first formal media interaction in the second season of ISL. “My apologies for the delay, there were about hundreds of fans gathered at my place,” Ganguly said politely.

But there was more celebration in store as ATK co-owners Sanjiv Goenka along with Harsh Neotia and Utsav sang birthday songs to welcome Ganguly. “It’s just any other day for me. I’m not a birthday person,” Ganguly said at his residence. He said he was gifted a shirt by his wife Dona. ALSO READ: Happy Birthday, Sourav Ganguly

With the domestic players’ draft for the ISL football tournament only two days to go, Ganguly later got into meeting with the co-owners and coach. Later in the evening, Ganguly, who is also the Cricket Association of Bengal joint secretary, was seen attending the working committee meeting at the Eden Gardens. 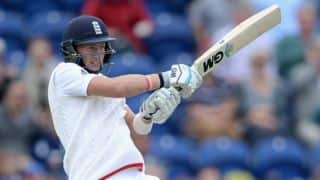