Sourav Ganguly: I don't see any change in captaincy till World Cup

Sourav Ganguly: I don't see any change in captaincy till World Cup

Ganguly said he had to give a "lot of explanations" to his boys unlike Dhoni.

“The key to doing well in places like Australia is the preparation before the Test series starts and not between the matches. I am not happy with India’s schedule of two two-day games ahead of first Test match,” Ganguly said during a panel discussion at the Hindustan Times Leadership Summit.

Ganguly, India’s most successful captain in overseas Test matches, recollected his time when India batted well during that phase.

“If you look at the Oval Test match few months back, we batted some 42 odd covers in the first innings and some 25 odd covers in the second innings. In Brisbane back in 2004, Australia made 323 and we responded with a 450 odd total. In Adelaide, we scored 550 and 700 in Sydney,” he said.

“At Headingley in 2002, we scored in excess of 600 runs. In that team, we had Sachin Tendulkar, Rahul Dravid, Anil Kumble, VVS Laxman. They were not loud people but always would give you that feeling of quiet confidence that we can do well,” he added.

Ganguly said he doesn’t see any change in Indian captaincy till the World Cup and that should be the way to go.

“We captained teams in different eras. But just like I had the tag of being captain who list tri-series final, Champions Trophy final, World Cup final, Dhoni has had a lot of success in major finals,” the elegant left-hander added.

On a lighter note, Ganguly said he had to give a “lot of explanations” to his boys unlike Dhoni or for that matter Virat Kohli.

“Well, I don’t think Dhoni has to give so much explanation. In Brisbane, I dropped Anil Kumble from playing XI and after team meeting, he came up to me and said that ‘I think I should retire and I am thinking of going back home’ and I would explain him my decision,” said Ganguly’s bringing the house down.

“You know I would ask Laxman to open and he would say ‘No’. I would set a field for Matt Hayden with deep fine leg and deep mid wicket and ask Zak [Zaheer Khan] to bounce him.

Zak would bowl full outswingers. I would walk up to Zak and ask ‘What happened? Why do you make me look like a fool? He would look at me And bowl another full outswinger,” Ganguly had audience in splits.

“Then there was Ashish Nehra, the biggest problem when it came to convincing him to sit out. Invariably at 11 pm my hotel room bell would ring and I would have to patiently explain him. And I was probably the only captain who literally fought with Harbhajan Singh in New Zealand and went up and said sorry.”

“If I told Anil that let Bhajji play this Test as he has 50 wickets in the season and he would reply ‘So what, I have 400 Test wickets’. And there was Yuvraj Singh I had to ensure that he is in his hotel room before a match!”

Ganguly also said that during his early days as captain in 2000, he heard about the match-fixing scandal but it didn’t affect him.

“When we were young — like Myself, Rahul, VVS, we would often speak how does match-fixing happen? How do these people operate?? And why is it that we have never been approached?”

“Luckily at the peak of fixing g controversy in 2000, I was in England for six months playing county cricket for Lancashire. So when I came back for Champions Trophy, I had an entirely new team and there wasn’t any past baggage.”

10 cricketers who support the 'Movember' moustache cause 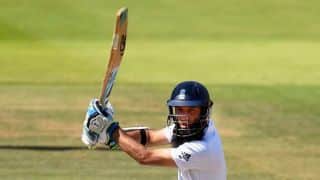 Moeen Ali: Would love to open for England again