After Harmanpreet Kaur’s heroics took Indian eves to their second World Cup final, former India skipper Sourav Ganguly is confident that they will beat England to lift the ICC Women’s World Cup 2017. Ganguly was optimistic of Mithali Raj-led side’s chances after they stormed into the final courtesy a 35-run victory over Australia in the semi-finals. Opting to bat, India were 35 for 2 when a timely 171-run knock (not out) by vice-captain Harmanpreet took her side to 281 for 4 in 42-overs aside contest. The bowlers responded well to restrict Australia to 245; thereby enabling an easy win.

“I saw her innings. (Harmanpreet) Kaur was superb yesterday. They will beat England in the final on Sunday”, Ganguly was quoted as saying by PTI. Wishes poured from all corners of the cricketing fraternity seeing India women’s dominance at the world stage. They will be eyeing their first major title at Lord’s; the same venue wherein the men’s team lifted their maiden World Cup in 1983.

Sachin Tendulkar, Michael Vaughan, Charlotte Edwards, Yuvraj Singh, Virat Kohli and VVS Laxman congratulated India women and Harmanpreet, backing them to go the distance against hosts and tournament favourites England. Both the teams locked horns in their first clash at Derby with India winning by 36 runs. A repeat of such performance will ensure a World Cup title for the eves. 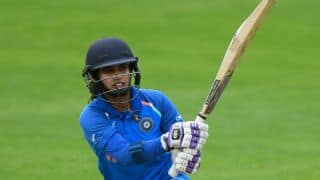 If India wins, it will help the future of women’s cricket in country, says Mithali Raj ahead of Women’s World Cup 2017 final