Sourav Ganguly is back in action at the right time

Sourav Ganguly is back in action at the right time

Dalmiya is back as president of the Board of Control for cricket in India (BCCI) and now Ganguly wants to be the coach of the India team.

India s first cricket captain to win back-to-back series in the West Indies and England, Ajit Wadekar was called lucky. Sourav Ganguly, the other captain who gave the team confidence of winning overseas, is also lucky in a different way. Just as the knowledgeable think that Wadekar was lucky to inherit a top-rate India team with the spin quartet at their best in 1970-71, Ganguly was fortunate to have four of the world s top batsmen — Sachin Tendulkar, Rahul Dravid, V.V.S. Laxman and Virender Sehwag — and two world class spinners — Anil Kumble and Harbhajan Singh — in his side.

If Vijay Merchant used his casting vote to make Wadekar captain, the strong hand of the then cricket board president Jagmohan Dalmiya was behind Ganguly s elevation. Poor Wadekar had to relinquish captaincy after a poor tour of England in unfortunate circumstances whereas Ganguly had a fairly long run before he, too, was eased out in a backroom manouvre. It would be unfair to take anything away from both Wadekar and Ganguly. Both proved capable leaders, Ganguly in particular had a free hand in leading the side. Sourav Ganguly denies discussing India coaching job with Jagmohan Dalmiya

Dalmiya put his foot down to save Ganguly s captaincy at least once when the impatient selectors wanted to dump him just as Srinivasan did in the case of Mahendra Singh Dhoni years later. To Ganguly s good fortune, Dalmiya is back as president of the Board of Control for cricket in India (BCCI) and now he wants to be the coach of the India team. In this era of Make in India Dalmiya and cohorts in the board appear to have decided to appoint a home-bred coach to manage the national team. The entire story has been constructed so well that it is difficult to believe it is not a trial balloon from the board president s office to gauge the public mood. Sourav Ganguly plays down murmurs about India coaching job

The source is a give away as the report is attributed to a top official of the board. The unnamed official could not have stated things like the coach s brief would be to see that the team starts winning overseas or question the performance of the team on their recent tour of Australia when they could not win a match in four months without Dalmiya s nod. The report quickly jumps to pick the candidate, too. It says that Ganguly is keen on getting the job. Here without taking the refuge under anonymity, the report clearly mentions that Ganguly has told BCCI president Jagmohan Dalmiya that he is interested in stepping into the shoes of Duncan Fletcher whose term ended with the 2015 World Cup.

Making a case for Ganguly, an official of the Cricket Association of Bengal (CAB), lists his achievements as captain and his tactical acumen. But he has to apply for the job, the official said, adding that Dalmiya did not make any commitment to him when the two met on Wednesday. As suspected, Ganguly reacted the next day and it was was on expected lines. He does not want to take cognizance of speculative stories and that he meets CAB president Dalmiya every day as joint secretary of the association! Ganguly, for good measure, clarified that the board has neither spoken to him or to any other cricketer, taking note of the report that Rahul Dravid is also in the race. He said both have the capabilities of performing the job. Both can be (good coaches). Rahul was a great player, Ganguly said, choosing his words carefully. He also by inference stated that something is cooking but don t jump the gun”.

As for the appointment of a new coach, the board has in the past looked to Sunil Gavaskar and Ravi Shastri for inputs and also to be on the interview panel in screening and selecting the applicants. The two were actively involved in getting South African Gary Kirsten and his predecessor Greg Chappell. The first overseas coach John Wright was acceptable to board as well as players because Rahul Dravid vouchsafed the former New Zealand captain s credentials having played for English county Kent when he was their coach. Rajeev Shukla appointed Chairman of IPL Governing Council; Sourav Ganguly, Ravi Shastri also named

Ironically, it was Ganguly who was instrumental in getting Chappell and to his dismay the former Australian captain wanted him out first as part of his overhaul plan for the team. Ganguly lost his captaincy and also the place in the team, though he staged a brief comeback after Chappell s exit. Nothing wrong if the decision is taken after a fair assessment of the work done by the last four overseas coaches. Eventually, the players will also have their say. In the past, Indian coaches were sacked on the insistence of senior players.

Having watched Ganguly as player and captain, it is not beyond him to push his application through ahead of others. Again, no disagreement if he tells the board president that he is keen on getting the job as he is confident of piloting the team to win more often overseas. There are wheels within wheels and there are people in the board who think that only an overseas captain can handle the India side with a high performance director like England and Australia have. ICC World Cup 1999: Sourav Ganguly, Rahul Dravid take Sri Lanka to cleaners

The experiment of Ravi Shastri as director after the Tests and for the ICC Cricket World Cup 2015 in Australia seemed to have worked, but Ganguly may not like someone to look over his shoulder. The board may not agree to compensate both for their earnings from the media assignments. Moreover, Ganguly might like to have a free hand and may question even take on the selectors if he doesn t get players of his choice. Then he will have to strike an understanding with an equally highly temperamental captain. Dravid, too, can be firm without being aggressive. The exercise has just begun, wait and watch for twists and turns. 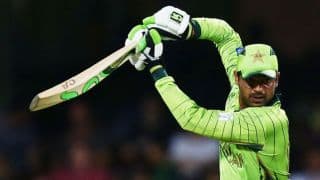