Ganguly recalled the day when India won the 1983 World Cup.

Both of them have led the Indian cricket team in two different periods. While one won the 1983 World Cup when the world least expected it, the other injected a killer instinct in the team and ensured victory was not confined to the subcontinent.

Former cricketers Kapil Dev and Sourav Ganguly have much in common, which also includes their bowling action to some extent. But on Thursday, when they were here for an event, they spoke about how technology widens the gap between the players of their respective generations.

“I wish there was television when I played. Even I would have loved to go back and catch the highlights to check the shots I played and if I made a mistake,” said Kapil, some of whose innings are only archived in still photographs.

“I am amazed that people these days can watch matches and other events on their mobile handsets. There maybe a day when you may just need to put on a pair of glasses to watch the action unfold,” he added.

Ganguly, on the other hand, said he was fortunate to play in an era of radio and television and recalled the day when India won the 1983 World Cup. “I was flying a kite on my terrace and listening to the live commentary on the radio while the match was on,” he said.

“Earlier we used to rush to the dressing room to ask for the score during a match and now technology has made us independent, one can just see it on their phones,” said the 41-year-old who recently retired from all forms of the game.

The man — who holds the record number of overseas Test wins (11) under his leadership — also pointed that the tech guy should be given his leisure time and should not be disturbed (by asking for footage of the match) after a tiring day. “He might be willing to go for a dinner outside and spend time with himself. The highlights on television saves their day,” he said adding: “I thought of going to Brazil to watch the football World Cup but I have to be at Trent Bridge where India will play England in the Test series. So I will catch the World Cup on my phone.”

Ganguly concluded praising the television industry for broadcasting the domestic matches and said how the present cricketers, including skipper M S Dhoni, is missing out by not being able to follow domestic cricket. “They are always travelling and hence, are missing out watching the first class players in action,” he said. 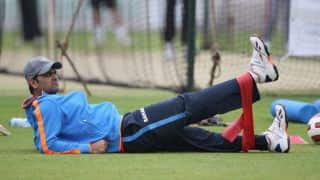