Ganguly has formally taken over as the 39th president of the BCCI on Wednesday at its general body meeting in Mumbai.

Former India opener and captain Sourav Ganguly has formally taken over as the 39th president of the BCCI on Wednesday at its general body meeting in Mumbai, ending a tumultuous 33-month reign of the Supreme Court-appointed Committee of Administrators (CoA).

The BCCI on its Twitter handle shared pictures of Ganguly taking charge in the presence of BCCI CEO Rahul Johri, Electoral officer N Gopalaswami and other top board officials.

Ganguly was the unanimous choice for the post of BCCI president along with Union Home Minister Amit Shah’s son Jay as the secretary. Mahim Verma of Uttarakhand is the new vice-president. Former BCCI president and current MoS finance Anurag Thakur’s younger brother Arun Dhumal is the treasurer while Kerala’s Jayesh George is the joint secretary.

However, Ganguly will have a curtailed tenure of around nine months as he would need to demit office by the end of July next year as per the provisions of new constitutions, which makes ‘Cooling Off’ period mandatory after six years in office.

With Conflict of Interest rules being an impediment, Ganguly will also face the challenge of having quality cricketers on board as far as the Cricket Advisory Committee (CAC) and national selection committee are concerned.

“It’s a great opportunity for me to do something good,” the former India captain, who will have to demit office in July, due to compulsory cooling off period, had said last week.

The 10-month is a short period and it also needs to be seen how the former India captain handles the disqualified old guards like N Srinivasan and Niranjan Shah, whose children are now officially part of the BCCI. 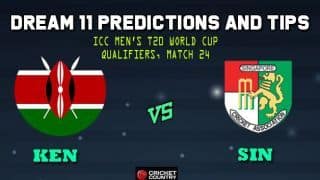