Sourav Ganguly on not being on Ravi Shastri’s list: He did not watch me play

Sourav Ganguly on not being on Ravi Shastri’s list: He did not watch me play

Former India captain Sourav Ganguly finally opens up about Ravi Shastri not including him in his all-time, best India captains list.

Former India captain Sourav Ganguly finally opens up about Ravi Shastri not including him in his all-time, best India captains list. In January this year, Shastri had revealed his list of most successful captains to have led India. For that matter, MS Dhoni topped his list. Terming Dhoni a dada captain , Shastri praised him for his achievements while left Ganguly out of the list. Now, after a month, Ganguly had a funny take on the incident, saying Shastri did not see him play when he was the captain of India and hence missed out. READ: Muttiah Muralitharan: Ravi Shastri may have missed Sourav Ganguly s name in India s all-time best captains

Talking on a Bengali chat show called Apur Sangsar, when Ganguly was further asked by anchor and popular actor Saswata Chatterjee to rate both Anil Kumble and Ravi Shastri, he rated Kumble 9 out of 10 and Shastri 7 out of 10. When Chatterjee jokingly praised for giving any marks at all to Shastri even after how the relationship has turned out to be, Ganguly replied with Bhodrolok toh!’ (He is a gentleman after all). He was also asked to rank himself, Kapil Dev, MS Dhoni and Mohammad Azharuddin based on success as India s captain. Ganguly refrained from commenting on himself, and ranked Dhoni above all, followed by Kapil Dev and Azharuddin.

Relationship between the two former India players went sour when the special committee consisting of Ganguly, Sachin Tendulkar and VVS Laxman was to elect India s head coach after Shastri’s terms as Team Director ended with BCCI. Shastri, who was vacationing in Bangkok and had an online interview with the committee, claimed Ganguly was missing during a major portion of his presentation which affected the decision. Later, Ganguly had come out clear denying the claims. PSL 2017: Shahid Afridi ruled out of final at Lahore 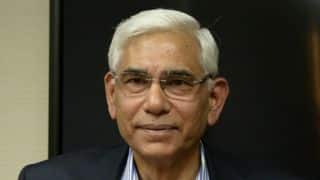 Vinod Rai: Lodha reforms implementation will be completed in 4-5 months