In the seven matches of India–West Indies series so far, the visitors are yet to break a sweat. India won the T20I series 3-0, followed a 2-0 win in the ODIS in which Virat Kohli hit two match-winning tons. In the first Test, West Indies were of no much for India as the number ranked Test side extended its winning run by winning the first Test by 318 runs.

Former India skipper Sourav Ganguly, in his column for The Times of India, has predicted that after wins in T20Is, ODIs and first Test, the visitors will also win the second Test to ‘whitewash’ the hosts.

“India continued their dominance over West Indies and are all set for a total ‘whitewash’ of the series. This will indeed be an achievement as dominating an opponent in all forms of the game surely needs a certain amount of excellence,” he wrote.

(Also Read: KL Rahul will be extremely disappointed with himself: VVS Laxman)

Ganguly further lauded Ravindra Jadeja, who has made a remarkable comeback to international cricket. The 30-year-old wasn’t a regular member of the side in the 2017/18 season. After the tour of West Indies in 2017, he lost his place in white-ball cricket. On the overseas tours in Tests, Jadeja mostly sat out of playing XI.

“One must also mention the efforts of Ravindra Jadeja. He didn’t lose belief even though he hasn’t been a regular in the side lately be it in ODIs or Tests. He came out and played a terrific knock in the World Cup semifinal and in the first Test too, he delivered when India really needed it,” Ganguly further wrote.

An injury to Axar Patel during Asia Cup 2018 saw Jadeja make his comeback to the ODI side and since then, there has been no looking back for him. Jadeja retained his place following Asia Cup and was also a part of World Cup 2019 squad, where his knock of 77 in the semi-final against New Zealand put India on the brink of a victory. Though they fell short by 18 runs.

Jadeja has also booked a confirmed place in playing XI in the longest format of the game, which is evident from the team combination that India went with in the opening Test. He was preferred over R Ashwin for a place in playing XI.

The second Test of the series will be played from August 30 to September 3 in Jamaica. 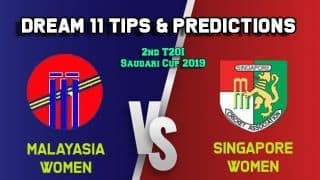