Sourav Ganguly has replied to the BCCI ombudsman and ethics officer after being asked to clear stand on allegations of conflict of interest.

Cricket Association of Bengal (CAB) President and Delhi Capitals advisor Sourav Ganguly has replied to the Board of Control for Cricket in India (BCCI) ombudsman and ethics officer D.K. Jain after the latter asked him to clear his stand on allegations of conflict of interest.

Speaking to IANS, a senior BCCI official in the know of developments said that the former India skipper in his letter to the ombudsman has made his position clear and also clarified that he was not part of any committee that was overseeing the organisation of the Indian Premier League (IPL).

“At present I do not hold any post whatsoever or howsoever in the BCCI. I am neither a member of the Apex Council of the BCCI nor an office bearer nor a member of any of the Cricket Committees constituted by the BCCI under its Constitution.

“I am also not connected with the administration, management or running of the IPL by being a member of any of the committees or other organisational units set up by the BCCI in connection with the IPL.

“I have resigned and/or withdrawn myself from all the said Committees. I am not a part of any committee/council/entity which has control or supervisory power or powers of management or administration of the IPL,” Ganguly’s letter read.

As per the official, the current DC advisor has also mentioned about the fact that he is in no way connected to Kolkata Knight Riders.

“Kolkata Knight Riders (KKR) is a franchise cricket team owned by Red Chillies Entertainment Private Limited. This is a company incorporated under the Companies Act, 1956. I am neither a shareholder nor a director of the aforesaid company. I have no stake whatsoever or howsoever in the said company,” Ganguly has said in his letter as per the official.

“Neither Red Chillies Entertainment Pvt. Ltd. nor its franchise team viz. KKR has any relationship or link with CAB. CAB has no stake or interest or rights in KKR or in the company which owns it. CAB does not control, own, manage, advice or administer either KKR or the company which owns it. During the IPL seasons, CAB merely lets out the stadium to the said franchise team against payment of consideration,” he has said.

On the question of him going against the rules of conflict as per the BCCI constitution, Ganguly wrote: “The spirit behind the aforesaid philosophy is that no one holding a particular post should (by dint of occupying another post) be in a position to influence any organisational unit/team under the aegis of the BCCI, either to its benefit or to its prejudice.

“In my respectful submission there is no direct or indirect interest; compromising roles; commercial conflict; prior relationship or position of influence within the meaning of the BCCI Constitution which may deter my involvement with the Delhi Capitals.”

There were three complaints filed by cricket fans from West Bengal — Bhaswati Santua, Ranjit Seal and Abhijeet Mukherjee — on how Ganguly as CAB chief can sit in Delhi Capitals dugout during their match against KKR at the Eden Gardens. 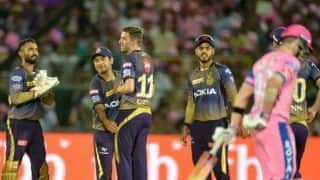