Sourav Ganguly was given the honour on Day Five of the India-England Test.

Sourav Ganguly, the former India captain, rang the five-minute bell at Lord’s to indicate the start of the fifth day’s play between India and England. Ganguly had made his Test debut at Lord’s and had made a century to mark that occasion. He later captained India at Lord’s in 2002 in a Test match and more famously during the NatWest series final where India stole a memorable win. On that occasion, Ganguly had celebrated the occasion by taking his shirt off.

Earlier in the Test match, Rahul Dravid, Claire Taylor, and Kapil Dev rang the bell. This is an honour that is given to individuals only once in their lifetime and is a momentous occasion for them. India are now pushing for a victory on Day Five at Lord’s as they have a good chance of winning a Test at Lord’s for the first time since 1986. 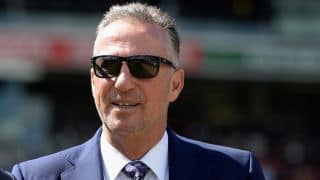