Dhoni resigned from captaincy and retired from Tests midway in India's tour of Australia in late 2014.

Former Indian skipper and Prince of Kolkata Sourav Ganguly believes Indian team needs the presence of MS Dhoni in the side. Dhoni has been the ODI and T20I skipper of the national side since 2007. But he resigned from captaincy and retired from Tests midway in tour of Australia in late 2014, after coming under scrutiny for his side’s poor performances away from home. Despite having led India to a win in Asia Cup 2016 and a semi-final in T20 World Cup 2016, there have been calls from certain sections for his retirement, and let the team be built for the future under Virat Kohli’s leadership. ALSO READ: Ganguly impressed with KKR, DD’s progress so far

But Ganguly sees no reason for Dhoni to quit, although doubts if he will be able to captain India in ICC Cricket World Cup 2019. “Every cricket team in the world plans their future. But my question to the selectors is three-fours years down the line, do they see MS Dhoni as captain of India? Dhoni has been fantastic in the way he has gone about his job as captain, but does he have the ability in next four years to see India into the World in 2019,” Ganguly told India Today.

“I am not saying he needs to quit cricket, I feel he should continue to play in the shorter formats of the game. India still need him in the limited-overs cricket,” he concluded.

Having been a skipper himself for a long time, Ganguly believes 13 years may just be too much for Dhoni. “Dhoni has been captain for nine years, which is a long period. Does he have it in him to go for another four years? He has already given up Test cricket and now plays only ODIs and T20s,” Ganguly said.

He also went on to praise Kohli, who has an mesmerizing ODI and T20I record. “Virat Kohli is getting better every time. He is probably the best in the world in terms of consistency. His mental energy, tenacity is unreal. His attitude on the field is superb. His record as Test captain has been good. So the selectors need to find an answer to whether they see Dhoni leading India in 2019? If the answer is no, then find a new captain. If the answer is yes, which I will find very very surprising, Dhoni continues,” he said. 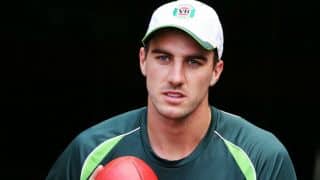