It is 20 years since Sourav Ganguly made that famous Test debut at Lord's with a century.

It is the season of either autobiographies or biopics of cricketers but the upcoming book might break all the records and can be expected to go on to be counted among the famous sports classics. It is none other than the Prince of Calcutta, Sourav Ganguly, who is set to release his autobiography, ‘A Century Is Not Enough’. Every cricket fan or at least Indian cricket fans have followed that decorated career, which was ended abruptly leaving so many Indian hearts shattered. The press conference during the home series against Australia probably is still afresh in his fans’ mind when he all of sudden announced retirement at the end of that series.

According to community.juggernaut.in, Sourav Ganguly talks us through the challenges of a cricketer, the hard times and the battles he has faced and shows us what it truly means to be a champion. From his debut century at Lord’s, transforming the Indian team under his captaincy, breaking Australia’s unbeaten streak in Test cricket and taking India to the 2003 World Cup final, the book has everything which will be no less than a treat for an Indian cricket fan, especially for the ardent Dada followers who still love him as much as they did during his playing days.

The former Indian skipper will work with Gautam Bhattacharya, senior cricket writer of ABP Group, to write the book. “I am extremely delighted to associate myself with Juggernaut and jointly we expect to deliver a great book,” Ganguly who is delighted about this new innings in his life said.

Meanwhile, Publisher Chiki Sarkar said, “Sourav Ganguly is one of India’s greatest captains, and one of the most interesting cricketers we have ever produced. We believe A Century Is Not Enough will become a book that readers – and not just cricket fans – will turn to again and again.” 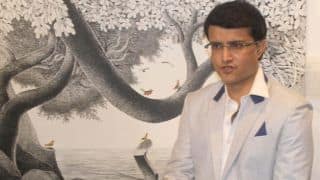