India were earlier bowled out for 334, with Ajinkya Rahane top scoring with 127.

South Africa go to tea at 43 for 1 against India on Day Two of the fourth Test at Delhi. South Africa still trail by 296 runs. Dean Elgar was the only wicket to fall as he was caught behind off the bowling of Umesh Yadav for 17. This was  the highest opening partnership for South Africa in this series, with the previous best being 21 at Nagpur between Elgar and Stiaan Van Zyl. India were bowled out for 334 in their first innings courtesy of a century by Ajinkya Rahane and a superb half-century by Ravichandran Ashwin. Kyle Abbott was the pick of the bowlers for South Africa as he finished with figures of 5 for 40 and Dane Piedt picked up four wickets, unable to add ti his tally on Day Two. Live Cricket Scorecard: India vs South Africa 2015, 4th Test at Delhi

India bean the day at the score of 231 for 7 with Rahane and Ashwin at the crease. The duo put on 98 for the seventh wicket, which made sure India go past the 300-run mark. Once Rahane went for 127, it did not take long for South Africa to get the other two wickets. India will hope that they can get more wickets in the post-tea session and increase their chances of securing a huge first innings lead. Live cricket updates: India vs South Africa 2015, 4th Test, Day 2 at Delhi

Ishant Sharma and Umesh opened the bowling for India. South Africa would have been happy not to see a spinner open the bowling, which has usually been the case in this series. Ashwin has bowled just a few overs, but no signs of Ravindra Jadeja as yet. He will perhaps play a key role in the final session of the day. Bavuma has batted well and South Africa will need their skipper Hashim Amla to get a big score in this match, something which has eluded him in this series so far.

On Day One, India had won the toss and elected to bat first. India have made a change to their side as Mishra misses out and Umesh has been included in his place. South Africa too have made a few changes. They have roped in Piedt, Abbott and Bavuma in place of Kagiso Rabada, Simon Harmer and Van Zyl. 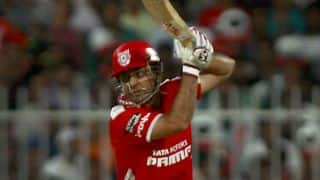