All the 10 South Africa 'A' players who were hospitalised due to "food poisoning" were discharged and they have been declared fit.

Chennai: All the 10 South Africa ‘A’ players who were hospitalised due to “food poisoning” were discharged and they have been declared fit to take the field against Australia ‘A’ in the tri-series cricket match. “All the 10 players have been discharged from the hospital and they are fit to play tomorrow against Australia A,” a team official said. Half the side had taken ill prior to South Africa A’s game against India A yesterday which the home team won by eight wickets. The likes of Reeza Hendricks, Omphile Ramela and Mthokozisi Shehzi had to play the match because the visiting team did not even have 11 men to take the field and they ended up aggravating their problems to be taken to hospital during the course of the game.

Quinton de Kock, who had only flown in to Chennai on Saturday afternoon, had to be pressed into service. He scored a gritty century, but he too suffered from cramps and later taken to a local hospital after yesterday’s match. Things were so dire that South Africa A’s video analyst Hendrikus Coertzen and India A’s Mandeep Singh had to be roped in as substitute fielders. 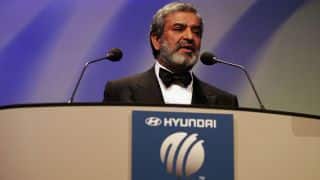