South Africa will play a day-night 4-day Test with Zimbabwe, The Test will start on Boxing Day till December 29.

South Africa will play a day-night 4-day Test with Zimbabwe, the Test will start on Boxing Day till December 29. South Africa will be going in the Test with their full force bowling attack. Dale Steyn, Morne Morkel, Vernon Philander and Kagiso Rabada were all named in a 14-man squad. The quartet will play a Test together for the first time as Steyn s recovery was a lengthy process.

AB de Villiers has made his comeback in the squad along with captain Faf du Plesses. Their fitness ability will be tested in the series. AB is suffering from his lower back strain while du Plesses took longer than expected to recover from his shoulder surgery.

“AB de Villiers is struggling with lower back stiffness and has been withdrawn from the three-day warm-up match as a precaution,” Proteas team manager Dr. Mohammed Moosajee.

“He is, however, available for selection for the Test match against Zimbabwe.”

Du Plesses s was not included in the squad at first although the head of their medical committee, Dr Shuaib Manjra, told Cricbuzz about his “touch and go” fitness for the Zimbabwe Test. South Africa will have to decide who will captain if du Plesses is unavailable. Dean Elgar may take the responsibility as he did in Lord s.

We need to make sure that everyone is fit

“It is a very exciting moment not just for South Africa but for world cricket to have Dale and AB, two icons of the game, back in the multi-day format,” said Zondi.

“After Zimbabwe we have two very tough home Test Series coming up against India, the No. 1 ranked side in the world, and Australia, who have just regained the Ashes in their current series against England. 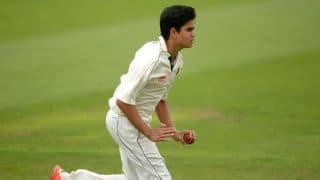