Regular skipper, AB de Villiers is back to the side after missing out on the Bangladesh tour.

Cricket South Africa (CSA) on Tuesday announced the 15-member squad for the Twenty20 International (T20I) and One-Day International (ODI) home series to be played against New Zealand. CSA held an official press-conference on Tuesday, after South Africa cricketers arrived home, following the Test series washout against Bangladesh. Morne van Wyk has been recalled to the ODI squad as Quinton de Kock is dropped owing to his poor form. Also, David Wiese was included in the 15-member squad for the ODIs and looks all set to make his debut. The series is scheduled to have a couple of T20Is, followed by three ODIs, reports cricket.co.za. Wayne Parnell keen on South Africa A performing well in upcoming tri-series

Regular skipper, AB de Villiers is back to the side after missing out on the Bangladesh tour due to family reasons. While JP Duminy and Morne Morkel would be missing the ODIs for the same reason, they would be palying the T20Is. The ODI squad also witnesses the return of Dale Steyn and Vernon Philander. Imran Tahir is all scheduled to play the ODIs, however in T20Is, he is replaced by Eddie Leie, following his impressive debut against Bangladesh. Hashim Amla frustrated as rain washes out Test series against Bangladesh

“We have maintained our policy of selection consistency which has paid dividends in the past. At the same time our national squads will never be a closed shop and we will always reward players who show the right level of form. David Wiese has been knocking on the door of the ODI squad for some time and this series provides another opportunity to see what he can offer as an all-rounder,” said Linda Zondi, CSA’s new selection convener. Bangladesh gain ranking points after rain-filled Tests against South Africa

“Morne van Wyk adds experience to our squads and he will also strengthen our leadership core, having been a successful franchise captain for many years now. Quinton de Kock remains an outstanding talent but we feel that the South Africa A tour of India presents the best opportunity at this stage of his career for him to rediscover his form,” she added. Bangladesh would have had to wait till 2023 to host South Africa: BCB CEO 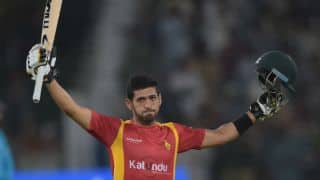