South Africa lost to the Springboks in the Mandela Legacy Cup.

Hashim Amla’s 51 held the Proteas together as they went on to score 181. They kept losing wickets, and Wayne Parnell and Kagiso Rabada were the other batsmen to get into the 20s. D de Allende took three wickets for the Springboks.

In the run-chase, Matfield opened the batting and scored 62 off 36 balls with eight fours and two sixes. Dale Steyn went for 29 in his three overs. Robin Peterson was taken for 35 in under three overs. Matfield’s innings set it up and the Springboks won it quite easily in the end. They had five wickets left when they finished the game in the penultimate over. 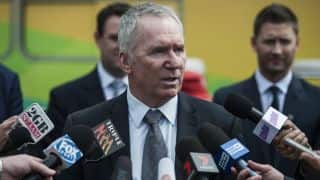 India vs Australia 2014-15: Allan Border says sledging should be toned down