Misbah-ul-Haq's half-century and Sarfraz Ahmed's rapid 49 were the only bright spots for Pakistan.

Misbah-ul-Haq‘s half-century and Sarfraz Ahmed‘s rapid 49 were the only bright spots as Pakistan were bowled out for 222 in 46.4 overs against South Africa, in their ICC Cricket World Cup 2015 match at the Eden Park in Auckland on Saturday. South Africa will be chasing 232 as per the revised target according to the Duckworth-Lewis method. LIVE CRICKET UPDATES AND COMMENTARY: Pakistan vs South Africa in ICC Cricket World Cup 2015

Pakistan made a cautious start as their openers Ahmed Shehzad and Sarfraz Ahmed did not take any risks early on. Clearly, preserving the wickets was the key but there are always doubts when it comes to some of the young Pakistani batsmen applying themselves. Shehzad began sedately and looked like he will score big today.

There were a couple of glorious cover drives early on from Shehzad but then he lost the patience and ended up hitting one in the air. Dale Steyn, positioned at mid-on, transformed into Jonty Rhodes as he ran a few paces to his right and then dived to take the ball in his hands. Shehzad fell for 30-ball 18. Misbah-ul-Haq completes 5,000 ODI runs during Pakistan vs South Africa match

But the highlight for Pakistan was the successful return of Sarfraz. The right-handed batsman stood outside the crease to the bowlers, played the ball on the up and always looked to score runs. In the 16th over, Sarfraz ripped into JP Duminy as he slammed three sixes to the South African spinner. But then, he took the risk of challenging David Miller fielding in the deep, and Sarfraz was run out for run-a-ball 49 in the 17th over.

Sarfraz made a successful comeback in team as he not only scored a rapid knock which showed positive signs for Pakistan, but he also added 62 runs for the second wicket with Younis Khan to keep his side moving ahead.

Sarfraz’s dismissal brought Misbah-ul-Haq at the crease. With two senior pros at the crease the whole of Pakistan would have hoped that there will be a strong partnership, but AB de Villiers’ dibbly-dobbly had Younis back in the hut in the 27th over. The South African captain, despite leaking runs, kept on coming to bowl and then he gave width on the fourth delivery of the 27th over to Younis, who hit it straight to Rilee Rossouw at extra cover.

Younis batted extremely well for his innings of 37 off 44 balls, but all the hard work went in vain with that loose stroke, which also opened the floodgates.

Sohaib Maqsood’s ordinary run continued as he gave a straight catch to Rossouw at point in the 32nd over, and Umar Akmal once again gave grief to Pakistani fans and management when he too joined the gang of batsmen hitting irresponsible strokes.

In the 37th over, Morne Morkel dropped one short and Akmal slapped it towards mid on. The ball was travelling and de Villiers — the man positioned at the spot lost it in background. But the quality of the South African skipper was once again seen as despite not tracking the ball throughout, he took a sharp catch. Umar looked in shock as well as in pain after the dismissal. So did Pakistan.

There were two rain intervals — which forced the officials to cut down the match to 47 overs-per-side, and the innings break to only 10 minutes. When the play resumed after the second interval, Shahid Afridi came out all guns blazing as he smashed a massive six off Dale Steyn, but a mishit ended his stay at the crease. Afridi scored 15-ball 22 with the help of two sixes and a four, and also completed 8,000 runs in One-Day International (ODI) cricket.

Misbah perished on the penultimate ball of the 44th over, as he played four dot balls and then ended up giving a catch to Morne Morkel off Steyn at thirdman. Misbah faced 86 balls and scored 56 runs with the help of four boundaries. 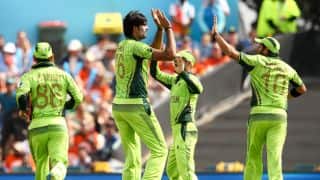