India put up a feeble resistance in the morning session of Day Five versus South Africa. Lungi Ngidi’s fiery bowling and some reckless shot selection cost India the Centurion Test by 135 runs before lunch. Rohit Sharma played with a lot of freedom something he should have done since first Test before falling for 47. Apart from him, only Mohammed Shami (28) put up some fight in the pursuit for 287.

The proceedings commenced with Cheteshwar Pujara and Parthiv Patel in the middle. The duo had a task to grab a massive opportunity with Virat Kohli, back in the pavillion. Nonetheless, Pujara had other plans. He became the first Indian to get run out twice in a Test by committing a grave blunder: he took on AB de Villiers’ arm.

Parthiv had got a nasty blow in his ribcage prior to stumps in the penultimate day. However, he stuck around. He looked positive and kept the scoreboard ticking in his brief stay. His innings was cut short by a short delivery. Parthiv went for a pull and was caught brilliantly by Morne Morkel at deep fine leg.

While Pujara fell prey to a horrible judgment, Hardik Pandya perished to a poor shot to a short, wide delivery with extra bounce. Pandya played an uppercut, got a thick edge and India slipped further down to 87 for 7. In the first Test, India were reduced to 92 for 7 and 95 for 7. The batting woes, hence, continued.

The counterattack or face-saving effort?

Following Pandya’s dismissal, Rohit combined with Shami to delay the inevitable with a 54-run stand. They played their shots, and kept the scoreboard moving despite few hits and misses. Rohit looked in full control with the license to attack. He played it late against the incoming deliveries, resorted from playing anything pitched outside off and hogged maximum strike. Shami, on the other hand, rode on his luck before falling for a 24-ball 28.

Rohit was trapped on a short delivery. He was moving around the crease in order to accommodate the hook. He departed 3 runs short off a half-century but his highest fourth-innings score.

India’s tail tried to open their arms to get some batting practice. The innings was hardly stretched following Rohit’s exit. As a result, India lose the Test by 135 runs.

India’s glorious run in Test cricket came to a halt. They were tied with England and Australia (9) with most consecutive series victories, and have been brought to the mat by the No. 2 ranked side.

Man of the Match: Lungi Ngidi. 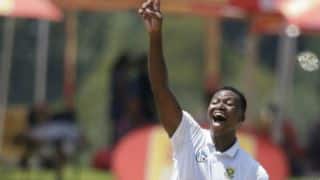 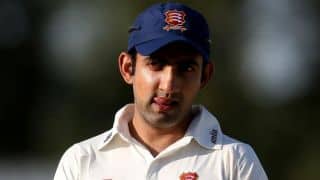 Delhi HC sends notice to pub, owner on Gautam Gambhir's plea to not use his name