Self-employed Bosman Puren said that the Ram Slam was a brilliant experience.

An overjoyed cricket fan has bagged a share of a whopping one million Rand during South Africa‘s domestic Ram Slam Twenty20 Challenge match at Senwes Park on Sunday. For the first time ever in arguably one of the most popular cricket tournaments in South Africa, this year sponsoring partners of the Ram Slam T20 Challenge, Ram Hand to Hand Couriers took a decision to award one million Rand to any attendee over 18 years of age, who catches a six with one hand during a televised match.

And that is exactly what Bosman Puren from Potchefstroom managed to achieve during the match between the Knights and the Highveld Lions , as he caught the desirable ball off the bat of Pite van Biljon from the Knights. Self-employed Bosman Puren said that the Ram Slam was a brilliant experience, adding that he is fortunate to have caught that one. He said that he was still flabbergasted.

If other fans are able to achieve the same at any of the other televised games, the 1 million Rand would be split equally. Alternately, if that fails to happen, Puren would take home the offered prize money. 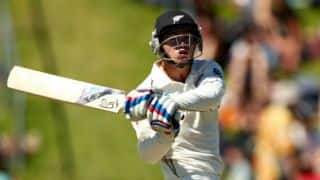