Hashim Amla scored a terrific century for the visitors.

South Africa cruised to a comfortable 93 run victory in the first ODI against Zimbabwe at Bulawayo. Hashim Amla scored a brilliant unbeaten century and helped South Africa reach a mammoth total of 309 runs. Quinton De Kock too played impressively, and his 63 off 68 balls, helped South Africa make a good start. South Africa’s scoring had rate dropped considerably after his dismissal, but Faf du Plessis hit four-to-four back boundaries in the 40th over to shift the momentum.

JP Duminy and AB De Villiers too made small contributions towards the end of the innings, and helped the visitors post an intimidating total.

For Zimbabwe, only Hamilton Masakadza and Sean Williams managed to showed some resistance in a match that was extremely one-sided. Both batsman scored half centuries, before falling.

After the three-match ODI series, both teams will participate in a triangular series starting August 25, which will also feature Australia.

India vs England 2014, 5th Test at The Oval: Varun Aaron run out as England set for win 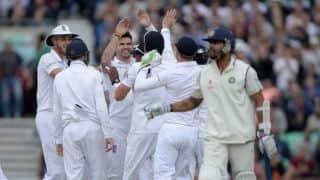 India vs England 2014, 5th Test at The Oval: England rub India's nose to the ground to complete 3-1 annihilation