South Africa dominate Wisden 'Cricketer of the Year' list for 2012

South Africa dominate Wisden 'Cricketer of the Year' list for 2012

South Africa dominate the Wisden 'Cricketers of the Year' list for 2012 with three players — a feat accomplished for the third time in the country's 150-year history. 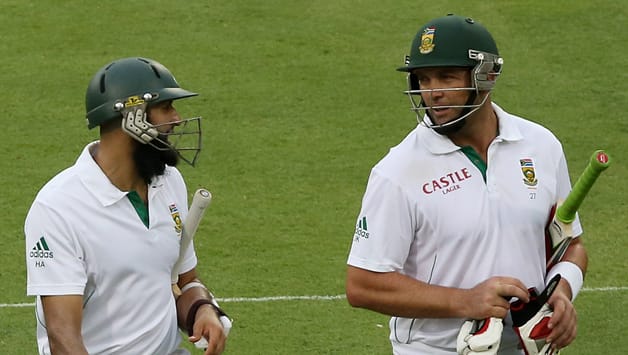 Hashim Amla (L), Jacques Kallis (R) and Dale Steyn (Not in Picture) were named in Wisden’s list for ‘Cricketer of the Year’ for 2012 © Getty Images

South Africa dominate the Wisden ‘Cricketers of the Year’ list for 2012 with three players — a feat accomplished for the third time in the country’s 150-year history.

Previous Wisden triples from South Africa were Graeme and Peter Pollock and Colin Bland in 1966 and Dale Benkenstein, Mark Boucher and Neil McKenzie in 2009.

“The only surprise about the selection of Jacques Kallis was that he hadn’t been chosen earlier. At The Oval, he made 182 and balanced South Africa’s attack superbly. His all-round excellence was a crucial difference between the sides.

“Dale Steyn cemented his status as the world’s most frightening fast bowler, blowing England away on the final afternoon at The Oval, then undermining them in the Third Test at Lord’s.”

“What a wonderful way for a South African celebration of the 150th edition of this famous publication – known affectionately as the ‘cricketer’s bible’,” said CSA Acting CEO Naasei Appiah.

“This recognition is richly deserved as has been clearly outlined by Editor Lawrence Booth in his comments. This is a proudly South African moment that all South Africans can enjoy.

“It has truly been a phenomenal year for our Proteas and they have been and will continue to be an inspiration to the nation.”

Graeme Smith, captain of the victorious 2012 squad that received the International Cricket Council Mace as world’s best Test team a fortnight ago, won the Wisden honour in 2004.

Akhtar Ayub: It feels like I'm starting my career again

IPL 2013: Relatively weaker sides have shown they cannot be taken for granted