South Africa came up with a stellar performance as they edged out England by just three runs to win the second T20I at Taunton.

Visitors South Africa came up with a stellar performance, edging out hosts England by three runs in the second of the three-match T20I series, at the County Ground in Taunton on Friday. With this win, South Africa stay alive in the series, making the third contest a decider. South Africa managed to put up a good total of 174 for the loss of eight wickets, courtesy opener JJ Smut’s 45 and skipper AB de Villiers‘s 46. In reply, England managed 171 for the loss of six wickets, courtesy opener Jason Roy’s hard-fought 67 and Jonny Bairstow’s 47. FULL CRICKET SCORECARD: England vs South Africa 2017, 2nd T20I at Taunton

Earlier, England skipper Eoin Morgan won the toss and elected to field first as he made three changes to his squad, with Tom Curran, Liam Livingstone and Liam Plunkett making their way in for Mark Wood, Alex Hales and Mason Crane. For South Africa, Morne Morkel and Chris Morris made their way in, while the notable omission was in the form of leg-spinner Imran Tahir. The South African openers were off to a steady start. However, with just 25 runs on the board, Reeza Hendricks was cleaned up by debutant Tom Curran for a mere seven.

Mangaliso Mohsele, along with Smutss, contributed a 32-run stand before the former fell for 15 to Plunkett. It was again followed by a healthy 39-run stand between Smuts and de Villiers, before the former fell short of his half-century by just five runs, as Dawson got rid of him in the 11th over. The skipper then held the fort, as he played a steady innings, while incoming batsman David Miller was dismissed for eight by Plunkett in the 14th over, as the score read 113. FULL CRICKET UPDATES: England vs South Africa 2017, 2nd T20I at Taunton

Out came Farhaan Behardien to support de Villiers. However, just 14 runs later, the skipper too fell short of his half-century by just four runs, falling prey to David Willey. It was Behardien then, along with incoming Morris, who contributed 30 runs more before Morris fell for 12 to Curran. Following his dismissals, none of the other batsmen could contribute much, while Behardien fell for 32 to Chris Jordan in the final over, as South Africa finished on a fair total of 174 for the loss of eight wickets, while Curran claimed 3 for 33.

As England began the chase, they were off to a shaky start, with just 15 runs on the board. Opener Sam Billings was dismissed for a mere three by Morris in the second over. However, it was followed by an impressive 110-run stand for the second wicket between Jason Roy and Bairstow. As Roy contributed 54 runs in the stand, Bairstow fell short of his half-century by just three runs, after being dismissed by Morris in the 14th over.

Meanwhile, Roy went on to score his second T20I half-century. However, just when it seemed he could steer England home, in the 18th over, as the score read 153, Roy was given out for obstructing the field. As Livingstone was batting, he defended the ball towards mid-off, while Roy went in for a run only to be denied by Livingstone. As Roy turned back to get back into the crease, he changed his run-up track and went on to the other side of the wicket, while a throw hit Roy, who was in line of the wicket. As the South Africans appealed, the umpires reviewed the decision, as the third umpire ruled it out on the grounds of the batsmen deliberately going across the wicket to come in line of the throw.

Following his dismissal, the incoming batsmen could hardly contribute as the tide turned in favour of the South Africans. Although the match went to the last over and the final ball, with Dasona and Plunket could not do enough to hit the winning runs for his team, as England will have to wait until Sunday to stand a chance to win the series in Cardiff, while South Africa deservedly stay alive in the series, with a slender three-run win. 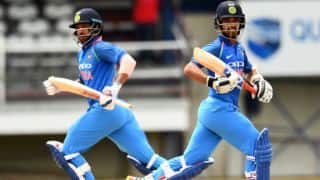 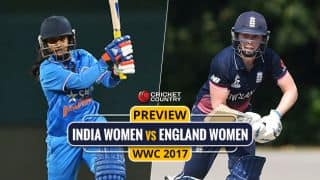