South African quick Morne Morkel has been declared fit to face Australia in the first test in Perth as the tourists ponder unleashing a four-strong pace attack at Perth.

Experienced South African quick Morne Morkel has been declared fit to face Australia in the first test in Perth as the tourists ponder unleashing a four-strong pace attack at the WACA. The Proteas have won on their last two visits to the WACA on their way to series triumphs in Australia and are full of confidence ahead of Thursday’s start to the three-test series. Faf du Plessis, who is standing in as skipper for the injured AB de Villiers, declined to follow his Australia counterpart Steve Smith by naming his side on Wednesday, leaving the hosts to guess whether they would play a spinner or not. FULL CRICKET SCORECARD: Australia vs South Africa, 1st Test at WACA, Perth

Dale Steyn is certain to spearhead the pace attack with Vernon Philander and exciting youngster Kagiso Rabada likely to support him with the potential fourth spot going to Kyle Abbott or Morkel. Morkel played the last of his 71 tests in January and has struggled with a back injury since but du Plessis said he was ready to go. “He has been working extremely hard to get back to full fitness,” he told reporters at the WACA. “He’s been trying to do everything possible and he has been bowling really well, so he is definitely in contention.” Steven Smith’s fitting reply to Dale Steyn’ ‘snake theory’

Steyn is only six wickets away from surpassing Shaun Pollock as South Africa’s most prolific test wicket taker and du Plessis said he hoped the 33-year-old would notch up his 422nd victim in Perth. “Dale’s got so much knowledge inside of him and he’s been brilliant,” he said. “He’s had his shoulder problems of late but he’s an important bowler for us in this series and, hopefully, he can stay strong right through the series. We need him.” Michael Clarke: AUS will play ‘the Aussie way’ vs SA in Tests

Whether South Africa go with four quicks will probably depend on whether they think the WACA will offer its traditional pace and bounce or the batsman’s paradise that was produced for the visit of the West Indies in 2015. “It looked like it was a bit harder today,” du Plessis said. “The previous three days, it was quite soft and green still.”

Groundsman Matt Page said he thought it would be a strip in keeping with the traditions of the ground. “Everything we try to produce has that pace and bounce, everyone wants to come here or turn on the TV and see that ball flying through to the wicketkeeper,” he told reporters. “That’s what we try and prepare.” 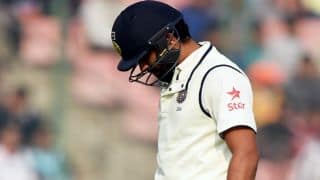