During the training session at on Wednesday, Philander did not play the warm-up game of football.

During the training session at Junction Oval on Wednesday, Philander did not play the warm-up game of football. He was bowling later on the centre wicket. On Thursday, he did not play the game again and was doing short runs under the supervision of the physio. SCORECARD: India vs South Africa ICC Cricket World Cup 2015

A team official told CricketCountry that Philander normally doesn’t play football and is expected to bowl in the nets in the leadup. Later, in the nets, Philander was seen stretching under the physio’s supervision and then went on to bat in the nets. At the time of writing, he was yet to bowl.

Russell Domingo, the South Africa coach, had addressed the media before the training session and he said he hoped Philander plays a big role in the game. “There seemed a little bit of bounce here (MCG) last time. Vernon thrives on wickets that offer a little bit. Hopefully there will be something in the wicket for him because he is a hell of a good bowler when there is something in the wicket for him. He is one of the guys in world cricket who is most effective when the wicket does offer something. I am hoping that he can play a big role for us on Sunday.” 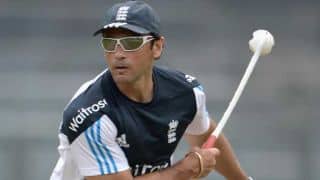