World No 1 Test team South Africa are expected to break their home jinx against Australia.

South African captain Graeme Smith said his team were happy to be regarded as favourites ahead of the first Test against Australia which starts at SuperSport Park on Wednesday.

“If you are the number one team in the world you have to be favourites,” Smith said on Tuesday.

“It’s something we have become accustomed to and we feel very comfortable with it. We’ve been number one for a period of time and we’ve travelled to some tough places to get it and to defend it.”

South Africa have not been beaten in a series since Australia defeated them in South Africa in 2008-09 and have built up a formidable record to open a sizeable gap at the top of the International Cricket Council Test rankings.

Australia go into the three-match series on the back of a 5-0 whitewash over England but Australian captain Michael Clarke acknowledged that the series would provide his team with a major challenge.

“South Africa have earned the right to be the number one team in the world,” said Clarke. “They are extremely tough to beat anywhere in the world but especially in their own backyard.”

Clarke said his team were looking forward to the series.

“That’s the challenge you want as a player, you want to be playing against the best to see how you measure up individually and as a team.

“It’s a great challenge, test and opportunity for an Australian team who are high on confidence at the moment through the success we had during the Australian summer.”

With both teams boasting formidable bowling attacks, Clarke said batting would be crucial.

“Both teams are going to have to bat well because there are two very good bowling attacks.

“It’s going to be a challenge for batters. Wickets (in South Africa) have been conducive to fast bowling in the past, which makes it a little bit tougher.

“It’s going to be a really good challenge for the Australian batters to come up against probably the best bowlers that I have faced in my career.”

Smith said he was confident that South Africa had the batting to counter an Australian pace attack spearheaded by left-arm fast bowler Mitchell Johnson.

“The performances our guys have been in around the world give us the stability and the platform to win Test matches. Everyone has contrbuted when needed.”

With both teams having several selection permutations, neither captain gave a hint as to their final line-up.

Smith said South Africa had no injury concerns, with batsmen AB de Villiers and JP Duminy both ready to play.

“We’ve got a good idea of where we want to go. We have a lot of options available, whether we go with an extra batter, an all-rounder or a bowler.”

Smith said he was glad the pre-match talk had come to an end.

“The Aussies have been good for ticket sales and newspaper sales,” he said. “We’re really excited that the contest is starting now.” 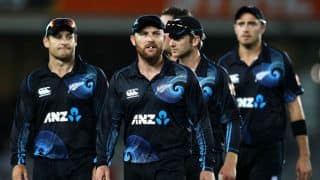