South Africa lead by 369 runs at the end of Day Three of the second Test.

South African fast bowler Morne Morkel has said that his side could declare after the morning session on Day Four of the second Test against Australia if they make 450 as it seems to be the ”magical number” with declarations.

With a lead of 369 after three days, South Africa reached 192 for the loss of four wickets, with Hashim Amla (93*) and Quinton de Kock (9*) at St George’s Park in Port Elizabeth on Saturday, although bad weather was predicted for Day Five of the Test on Monday.

According to Sport24, Morkel said that his team would assess where they are standing after the first session on Sunday, although he believes that they can declare if they reach the “magical” 450.

Stating that his team had little faith in weather predictions, Morkel also said that as they cannot trust the weather, they have fast-scoring Amla and De Kock at the wickets, although Australian captain Michael Clarke suggested he might have declared already were he in South Africa’s position. Despite facing an uphill battle for the remainder of the Test, Clarke was optimistic and said that they need to bat their “backsides off” if they want to win the game. 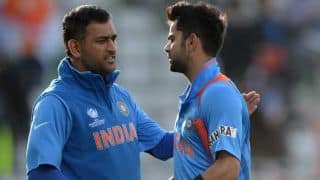