South Africa registered a comfortable eight-wicket win over New Zealand in the first T20 International at Durban on Friday. 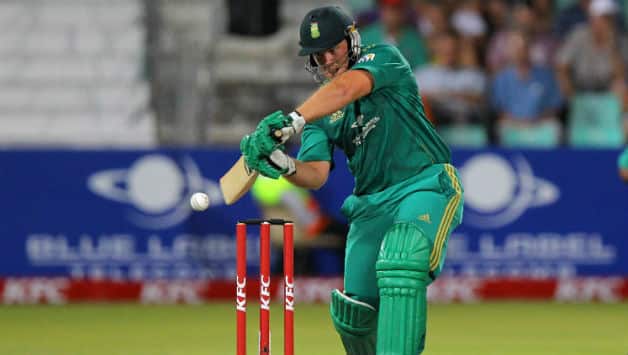 South Africa sent New Zealand crashing to an eight-wicket defeat with 47 balls to spare in the first Twenty20 international at Kingsmead on Friday.

Fast bowler Rory Kleinveldt took two early wickets to start a slide from which New Zealand never recovered. They were bowled out for 86 after winning the toss.

Kleinveldt took the key wickets of Rob Nicol and captain Brendon McCullum and finished with three for 18 to capture the man-of-the-match award.

South Africa romped home in 12.1 overs with new captain Faf du Plessis making 38 not out, while Quinton de Kock, making his debut four days after his 20th birthday, slammed a quick 28 not out.

It was a disappointing start for New Zealand, who arrived as underdogs but were expected to put up a reasonable fight in the Twenty20 internationals.

They were missing several key players, including former captain Ross Taylor, who was unavailable for the tour, and suffered another blow when experienced batsman Martin Guptill could not play at Kingsmead because of a stomach ailment.

Fast bowler Trent Boult was also unavailable because of a similar complaint.

On a pitch with pace and bounce, the tourists lost three wickets inside the first five overs. Nicol charged Kleinveldt and was caught behind, while McCullum top-edged a hook and was caught at fine leg. In between Peter Fulton drove Dale Steyn to mid-on.

It did not get much better for the Black Caps although left-handed newcomer Colin Munro, who was born in Durban and did his early schooling in the city before his family moved to New Zealand, made 23. Doug Bracewell hit 21 not out.

New Zealand newcomer Mitchell McClenaghan had Richard Levi caught at slip for a duck, bowling a wicket maiden at the start of the South African innings. But Henry Davids and Du Plessis put on 45 before Du Plessis and De Kock finished the match.