The Proteas have won the third and final ODI held at Hambantota.

South Africa register their first series win in Sri Lanka, after winning the third and final One-Day International of the series by 82 runs. South Africa posted a massive total of 339 with both Quinton de Kock and AB De Villiers scoring 128 and 108 respectively. In response, Sri Lanka could only score 257 runs.

South Africa also won the first ODI of the series in Colombo by 74 runs. Hashim Amla has been the star performer for South Africa scoring centuries in the first two ODIs and a crucial 48 in the third. The series win would certainly give the South African team a lot of confidence, as they look to prepare for the ICC World Cup 2015. 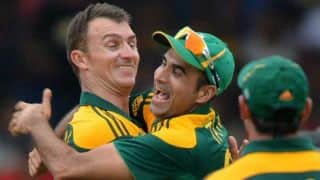