Steyn was the star of the show taking his 26th five wicket haul and ending up with figures of 5 for 33.

South Africa registered a 204-run victory against New Zealand in the second Test of the two-match Test series, at Centurion. A fantastic swing bowling performance, assisted by the extra bounce at the SuperSport Park pitch from Dale Steyn, Vernon Philander and Kagiso Rabada, sealed the series for them in what had become a winner-takes-it-all Test after wet outfield had led the first Test into a draw. Steyn was the star of the show taking his 26th five wicket haul and ending up with figures of 5 for 33. But Quinton de Kock received the Man of the match award for his two fifties, couple of catches and his glovework behind the stumps. FULL CRICKET SCORECARD: South Africa vs New Zealand, 2nd Test at Centurion

Steyn picked up Tom Latham’s wicket of the very first ball of the first over. Latham tried to leave the ball, but the extra bounce off the pitch, richocheted off his bat and hit the stumps. Steyn then removed Martin Guptill off the last ball of the same over. Guptill edged a slightly short of length, almost good length delivery, to Hashim Amla at slip. Both openers were out for a golden duck. Steyn then removed Ross Taylor, when the ball stayed low to hit his pads. New Zealand were 5 for 3 then. FULL CRICKET UPDATES; South Africa vs New Zealand, 2nd Test, Day 4

A few overs later, Philander then produced the big wicket of Kane Williamson, who found an outside edge that was taken brilliantly by de Kock. At 7 for 4, South Africa were clearly on top. New Zealand went in to Lunch on Day Four at 18 for 4, with Henry Nicholls and BJ Watling at the crease.

After lunch, the duo of Nicholls and Watling carried on the fightback. They put on a 68-run partnership before Watling was trapped in front by spinner Dane Piedt, brought into the attack. Nicholls reached his second Test fifty along with Mitchell Santner at the crease. Steyn then bowled Santner to not only bring down the 6th wicket for New Zealand, but also reach a personal milestone. Steyn went past Wasim Akram’s Test wicket tally of 414 wickets as he took his fourth.

Doug Bracewell did hang around for a while to add 30 runs along with Nicholls who was playing well on the other end, but Philander trapped him in front to send him back as the hawk-eye showed the ball was clipping leg-stump. New Zealand were 164 for 7 at that stage. Tim Southee played a few shots before Kagiso Rabada bowled him with a yorker that hit off the root of the off stump. Wagner too was done in by a yorker from Rabada, that wrapped him low on the pads.

Steyn then took the last wicket to finish the proceedings as Nicholls was caught by Rabada after a well made 76-run knock.

Earlier in the first innings South Africa put a total of 481 for 8 and declared, after Faf du Plessis had scored his 5th Test century, along with the top four batsmen scoring half-centuries. Talking about his hundred from first innings to AFP, du Plessis said, “There is a lot happening in the wicket and we just needed one guy to anchor the innings and keep them out there as long as possible. The plan right from the beginning was to try to get to 400, which is a good score on this wicket, and then have a little dip at them at the end of the day.”

He added, “The grass stands up a little more towards the end of the day and because of the light you can see the little indentations on the pitch which you don’t see when the sun is shining brightly in the middle of the day. It plays on your mind a bit.”

A big opening partnership between Quinton de Kock and Stephen Cook laid the foundation for South Africa. Both scored fifties, before they got out. Amla and JP Duminy then put on a partnership that saw them reaching half-centuries too. Amla played some classy shots in his innings, while Duminy answered his critics and reached his first Test fifty in two years. Neil Wagner was the pick of the bowlers for New Zealand in the first innings with figures of 5 for 86.

The Black Caps, were then off to a poor start when they came out to bat in the first innings. They were 38 for 3 at stumps on Day Two. Day Three then saw a superb show of pace bowling as Rabada’s breakthrough to get Henry Nicholls was the opening Steyn and Philander made most of. Kane Williamson was the top scorer for the visitors as they were bundled out for 214, South Africa getting a lead of 267 runs. du Plessis did not enforce a follow on though.

In the hosts’ second innings they declared at 132 for 7 with de Kock top scoring with 50 and Temba Bavuma remaining unbeaten at 40. Tim Southee picked up figures of 3 for 46. Day Three saw the bowlers hitting the deck hard and using that extra bounce to the best of their ability. 13 wickets fell on Day Three, out of which 12 were picked up by fast bowlers. South Africa’s top order apart from de Kock was back in the pavilion after a fine spell of pace bowling from Southee and Boult got those early breakthroughs for New Zealand. 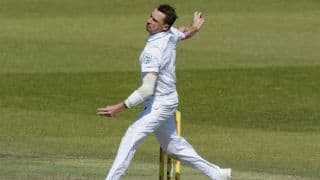