After losing the ODI series at home against South Africa, New Zealand coach Mike Hesson called the series a missed opportunity. Though the hosts lost the series, they gave a neck-and-neck fight and lost the decider. However, South Africa won 3-2, reclaiming their numero uno spot in the ICC ODI Rankings. The coach praised team s efforts for the power-packed performances. He also shed some light on Tom Latham and Luke Ronchi, both of whom will be a part of New Zealand s next ODI tri-series in Ireland. He also opined that the team needs to act more positively under pressure. AB de Villiers: We re ready for Champions Trophy 2017

Hesson revealed to EspnCricinfo, “You don’t want to state the obvious, but sometimes you have to. When we were under pressure the way we responded wasn’t where were wanted to be. I thought we were in a bit clumsy with the bat, some of our decision-making under pressure – from some exceptional bowling – was disappointing. It was a heck of a series and a bit of a ding-dong battled against the world No. 1. Wellington was quite different in terms of the surface, that was more nip, but we got put under pressure by a good side and weren’t able to deal with that. We’ll need to improve in terms of soaking up pressure which two or three times this summer we haven’t done as well as we’d have liked.”

“This was a lost opportunity, that would be a fair reflection. But most people will acknowledge that we’ve gone toe-to-toe with the best side in the world which many haven’t been able to do for a long time. We fell at the last hurdle, but all in all we’ve played some pretty good cricket,” Hesson added.

He concluded speaking about the two wicketkeeper-batsmen, Ronchi and Latham: Both Tom and Luke are highly likely to be involved. The series in Ireland will be crucial to get a pecking order. I’ve been delighted with the wicketkeeping of both, but no doubt both are short of runs and that’s something Tom and Luke are well aware of, probably more than anyone. It’s not long ago that Tom was a really good performer for us at the top of the order. We know they are high quality players but have had a tough period.” 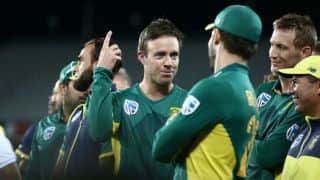