Australia captured an early South African wicket after stretching their first innings by 70 runs on the second day of the first Test at Newlands on Thursday. 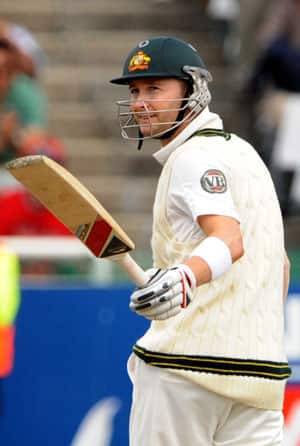 Australia captured an early South African wicket after stretching their first innings by 70 runs on the second day of the first Test at Newlands on Thursday.

South Africa were 49 for one at lunch in reply to Australia s 284. Jacques Rudolph was bowled by Ryan Harris for 18.

Australian captain Michael Clarke took his score to 151 before he was last man out in a frustrating morning for the South Africans.

Clarke resumed on 107 with Australia precariously placed on 214 for eight at the start of play. Tailender Peter Siddle made 20 and supported Clarke in a ninth wicket stand of 59, the second best of the innings, as the last two wickets added 70 runs.

South Africa paid the penalty for setting defensive fields to Clarke from the start, with Clarke edging Vernon Philander through a vacant second slip in the second over of the day.

But after that let-off Clarke continued to play with the authority he displayed in salvaging his team s fortunes on the first day.

Siddle was dropped on five when Imran Tahir put down a chance at backward point off Dale Steyn, who was unable to add to his wicket haul, finishing with four for 55.

Siddle finally fell to Morne Morkel when he pushed a simple catch to AB de Villiers at cover after defying the bowlers for 73 minutes and 54 balls.

Joined by last man Nathan Lyon, Clarke reached 150 for the fourth time in his Test career with a scorching straight drive off Morkel but then had his leg stump knocked out of the ground when he stepped away in an attempt to force the bowler to the off side.

Rudolph, the leading scorer in South African domestic first-class cricket this season, looked in confident form at the start of the home team s innings but was stuck on his crease and bowled by a ball from Harris which cut back between his bat and pad.(AFP)