Chris Morris and Kagiso Rabada managed to stitch an unbeaten 42-run stand till the end of the day's play.

England were on top against South Africa at the end of Day 1 of the 3rd Test at Johannesburg by restricting the latter to 267 for the loss of seven wickets at stumps. The South Africans lost wickets in a heap in a familiar fashion after getting off to a good start thanks to their top-order, and have now pinned their hopes on the unbeaten pair of Chris Morris (26 off 50 balls) and Kagiso Rabada (20 off 48 balls) to guide them past the 300-run mark, the achievement of which will be a moral victory in itself. Steven Finn and Ben Stokes were the pick among the bowlers with two wickets apiece for 50 and 53 runs respectively. Finn bowled one of his best spells in his career so far during which he got rid of Hashim Amla for 40 with a near-unplayable delivery. SCORECARD: South Africa vs England 2015-16, 3rd Test at Johannesburg, Day 1

The South African opening pair of Dean Elgar and Stiaan van Zyl got their side off to a decent start after skipper AB de Villiers won the toss and elected to bat. Van Zyl played a few strokes with ease, and was looking good to improve upon his disastrous run with the bat in the recent past, before falling victim to a soft dismissal — a half-hearted pull off an average delivery from Stokes that resulted in a top-edge to wicketkeeper Jonny Bairstow. UPDATES: South Africa vs England 2015-16, 3rd Test at Johannesburg, Day 1

Elgar and Amla then consolidated, adding 73 for the second wicket as they made merry of a good batting track coupled with a fast outfield. Stuart Broad was particularly expensive during this period of time, as the duo moved to the 40s. Moeen Ali however, came to the rescue for England as Elgar got a faint edge off a delivery that straightened after pitching outside off. South Africa lost their second wicket with 117 on board, though they had Amla at the crease and a plenty of batting potential to come. A score of 400 was not looking like the most difficult of prospects till that point.

A dream spell by Finn as well as some wayward batting by some of the better South African batsmen saw their downfall later in the innings, as they collapsed to 225 for the loss of seven wickets. Amla was done in by a peach of a delivery from Finn — a length ball pitched along the off-stump, angling away from Amla who got a faint nick while attempting to defend. Skipper AB de Villiers suffered a soft dismissal after a few lusty blows in his quickfire 36 off 40 balls, getting some glove to a bouncer off Stokes that he attempted to pull, resulting in Jonny Bairstow’s fourth catch of the innings.

Du Plessis managed to get a couple of boundaries to move to 16, though his timing and stoke-play was below-par. It ultimately cost him his wicket when he flicked a delivery from Finn that was angling into his pads, sending it down to Alex Hales at deep backward square-leg. The most unfortunate dismissal was perhaps that of Temba Bavuma, with Dane Vilas attempting a risky single after squeezing the ball wide of mid-on. Bavuma was caught well short of his crease while on his way to the striker’s end as he departed for 23 off 44 balls. Vilas was the seventh dismissal as he was caught by Moeen Ali at deep fine-leg after getting a top-edge off an attempted pull to give Stuart Broad his only wicket for the day.

Chris Morris, who had struck an impressive 69 on the previous day, managed to forge a potentially life-saving partnership with Kagiso Rabada for the seventh wicket, which was worth 42 at the end of the day’s play and is South Africa’s last hope at the moment for them to cross the 300-run mark. England, on the other hand, will aim for a couple of quick dismissals before they can send their top-order to make merry on a conducive pitch.

South Africa earlier won the toss and elected to bat, bringing in Hardus Viljoen and Dane Vilas in place of Dane Piedt and Quinton de Kock. Vilas had to be flown in from Port Elizabeth on an emergency basis after de Kock was ruled out of the Test barely an hour before the start of play due to a swollen knee. Vilas was seen arriving at the Wanderers 45 minutes after the South African innings had started. AB de Villiers is currently leading the hosts following Amla’s resignation from the post after the second Test at Cape Town. 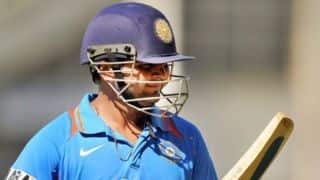 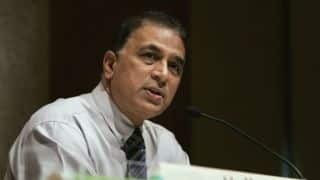 Sunil Gavaskar: Pink ball should be tried in ODIs