It took South Africa less than a session on Day Five to topple Bangladesh and win the first Test by 333 runs at Senwes Park, Potchefstroom. Resuming at 49 for 3, Mushfiqur Rahim and Mahmudullah had a big task in hand. Nonetheless, wickets tumbled like nine pins as Kagiso Rabada and Keshav Maharaj took off from where Morne Morkel left in the penultimate day. In pursuit of 424, Bangladesh folded for 90 in 32.4 overs. Rabada and Maharaj shared 7 scalps between them. From Bangladesh’s perspective, only Imrul Kayes, Rahim and Mehedi Hasan registered double figures.

Chasing 424, Bangladesh were on the mat. Morkel, despite a side strain, removed openers Tamim Iqbal and Mominul Haque in the first over. Mahmudullah and Rahim played out the last hours of Day Four, and were expected to put up some resistance on Monday. However, nothing of that sort happened.

Rahim edged one and Hashim Amla took a brilliant overhead catch at slips as Proteas got going in the first session. Rabada struck twice, removing Mahmudullah and Liton Das. Mahmudullah was caught inside his crease and got his stumps rattled. Liton offered no shot to a delivery that came inside, and trapped him for 4.

Bangladesh kept playing their shots despite early blows. Sabbir Rahman missed a sweep off Maharaj, and was plumbed for 4. Tourists’ self-destruction continued as Shaiful was run-out for 2, leaving Bangladesh at 75 for 9. Mehedi Hasan became the third batsman to cross double figures, before he lost last man Mustafizur Rahman. Rahman gave a simple return catch to give Maharaj his fourth wicket. Bangladesh folded for 90 in 32.4 overs; failing to play out the first session as well.

Earlier, Bangladesh elected to field on Day One. Dean Elgar’s 199, debutant Aiden Markram’s 97 and Amla’s 137 propelled hosts to 496 for 3 decl. The declaration came as a surprise for many. However, Faf du Plessis’ shrewd captaincy led to tourists opening the innings without Tamim. The regular opener had just gone off the field due to injury. Bangladesh avoided the follow-on courtesy fifties from Mominul and Mahmudullah whereas Sabbir and Tamim contributed as well.

With a lead of 176 runs, South Africa piled up 247 for 6 decl. Faf and Temba Bavuma notched up half-centuries to set a mammoth 424 for victory. By virtue of this win, Faf and co. have taken an unassailable 1-0 lead in the two Test series.

Man of the Match: Dean Elgar 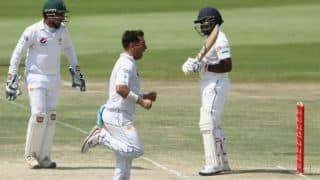 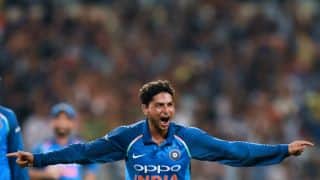