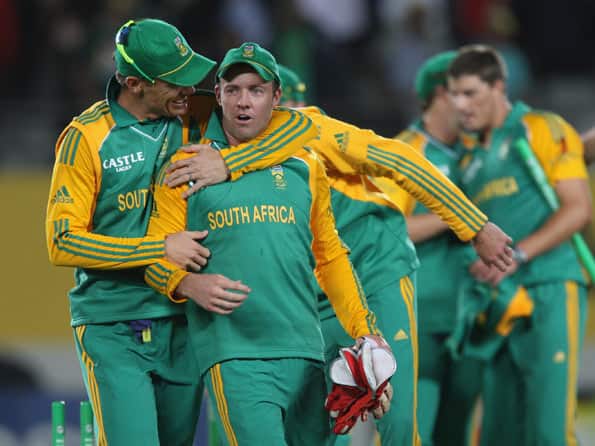 De Villiers feels England’s recent one-day success has masked a lack of depth in their batting that could be exposed by a bowling attack of South Africa’s quality.

England have risen to the top of the one-day world rankings on the back of 10 wins in 2012, including a 4-0 series rout of Australia.

But they will be without star batsman Kevin Pietersen after the text message controversy that led to his omission from the squad.

And while De Villiers believes England are a “wonderful” team, he is confident the South Africans have enough quality bowlers to knock their hosts from pole position for the second time in quick succession.

South Africa ended England’s reign as the top-ranked Test team thanks to dominant displays from fast bowlers Dale Steyn and Morne Morkel and they will be unleashed again in the five-match one-day series that starts in Cardiff on Friday.

“I think they are a little bit light in the batting department, that might be something that we will be attacking. We’ll see,” De Villiers said on Thursday.

“They’ve got Bresnan that I think they rely on quite a bit coming in at seven.

“The reason why they’re playing conservatively up front is because they’re a batter light. They don’t go with the wicketkeeper at seven like most teams do.

While De Villiers is in confident mood, he knows England have not lost a home series since 2009.

The wicketkeeper-batsman is also wary that Alastair Cook and Ian Bell set up the crushing series win over Australia with some impressive displays and he admits the Proteas will have to be at their best to win the series.

“You’ve got to play the situation and the conditions that you’re dealt. In England it moves around a little bit with the two new balls,” he said.

“You can’t just go out there and hit every ball for six. You will be three or four down very quickly.

“You have to try to get through the new ball with as a little damage as possible.”

After knocking England off their coveted Test perch De Villiers denied that taking over at the top of the 50-over format was the main objective of the five-match series.

South Africa will go top with a series win but De Villiers is more concerned with developing a new-look side.

“It’s definitely not our main goal. We’re not here focused on world rankings, certainly not as much as the Test series,” he said.

“It would be nice to get that as a bonus but we feel we’ve got other stuff to focus on. We’re trying to build a brand of cricket that we want to play.

“We want to play attacking, good cricket. I’d like to think of us as a team that has done fairly well under pressure, so when we are put under pressure this series we will be looking to attack that’s for sure.”

England have had just four days to get over their Test series defeat before they return to action in Cardiff.

But captain Cook welcoming a number of new names into the squad, De Villiers doesn’t think England will suffer a Test hangover.

“That won’t be huge, maybe a tiny little bit of a factor. It’s the same situation we find ourselves in with a new-look team under Cook,” he said.

“They’ll feel refreshed and re-energised. Their ODI team is a totally different unit and I can’t see them carrying a lot of scars from the Test series.

“There is just a tiny little mental factor but if we don’t start well tomorrow we lose that momentum right away.” (AFP)